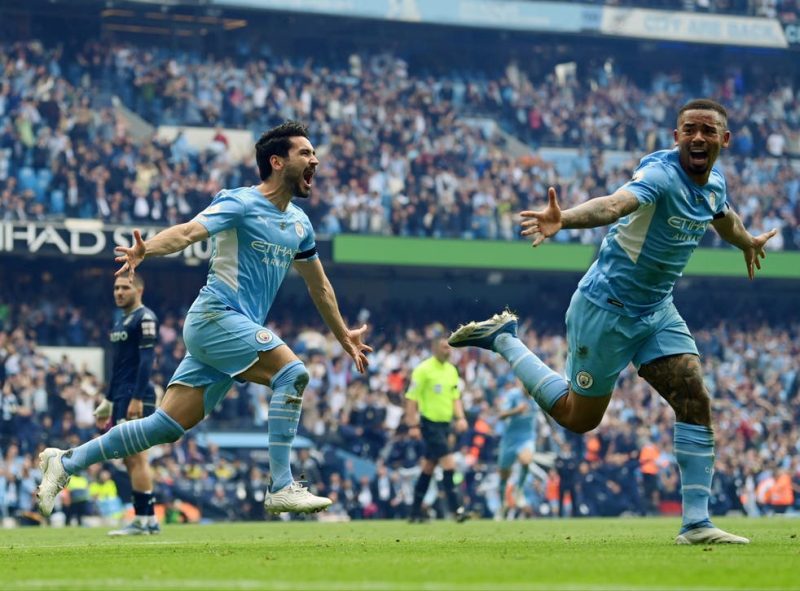 Manchester City came from two goals down to defeat Aston Villa 3-2 to win the Premier League for the sixth time at Etihad Stadium.

Pep Guardiola’s  Man City side finished one point ahead of Liverpool, who beat Wolves 3-1.

Three goals in five minutes late in the game turned the match – and the title race – on its head as substitute Ilkay Gundogan scored two, either side of Rodri’s strike. Liverpool’s late win over Wolves meant that only victory would have been enough for Man City.

Ilkay Gundogan, on as a substitute for Bernardo Silva, gave Man City hope with a far-post header in the 76th minute, and Etihad Stadium was a wall of noise when Rodri drove a low finish past Villa keeper Robin Olsen two minutes later.

The Premier League title winning was complete with nine minutes left as Gundogan once again arrived at the far post to put Man City in front, the decisive contribution on this nerve-shredding final day.

Man City did need those three points as Liverpool beat Wolverhampton Wanderers – with City boss Guardiola overcome with emotion and breaking down in tears at the final whistle.

Villa had taken a two-goal lead through Matty Cash and Philippe Coutinho.