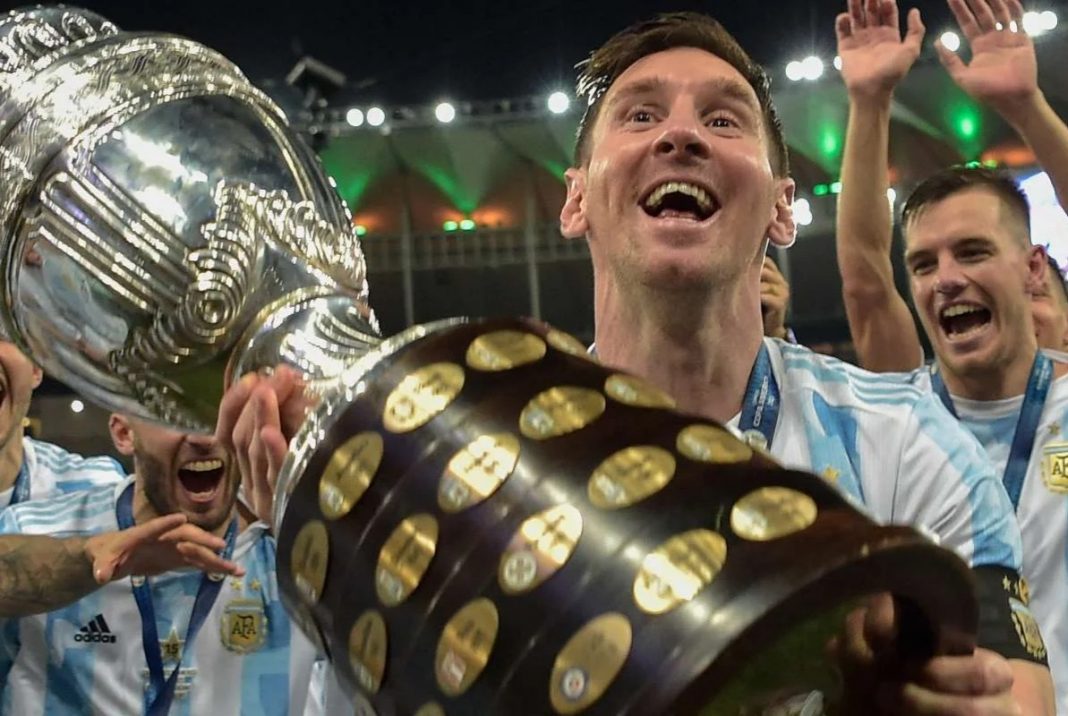 Angel Di Maria came up with the vital goal, but nobody did more to drive the Albiceleste to glory than their veteran captain

Finally, the day arrived, and in the most thrilling of circumstances.

Lionel Messi finally banished the memories of years of international despair as his Argentina team downed Brazil 1-0 to take the Copa America title in the Selecao’s own backyard.

And having played every single minute of the tournament, driving his bruised body to new limits amid the flying tackles of South America’s fearsome defenders, there is now no doubt that this Copa, from start to finish, belonged to the 34-year-old wizard – who was just seven when, in 1993, the Albiceleste last experienced glory in this competition.

While Messi had been in spectacular form going into the final, so had his friend-turned-nemesis Neymar, who had his own motivation for victory having missed out in the Maracana two years ago as Brazil claimed the Copa title at Peru’s expense.

The Barcelona star, moreover, had yet to test his wits against a team of the calibre of the Selecao, who had breezed through the tournament on home soil to set up this much-anticipated decider.

Anyone tuning in expecting a festival of flowing football between these two titans, though, was soon to be disappointed. Argentina and Brazil went toe-to-toe in a brutal first half, with play barely developing amid a torrent of fouls from both sides.

It took one spectacular move from the visitors, an oasis in this football desert, to break the deadlock. Rodrigo De Paul let loose with a perfectly weighted lofted pass from inside his own half which just eluded Renan Lodi, amongst the Selecao’s weakest links, to release surprise starting inclusion Angel Di Maria.

The Paris Saint-Germain star has featured more from the bench in this Copa, but he was ideally placed to take advantage of the sole clear chance of the first half, chipping over the onrushing Ederson and sending the handful of Argentina fans lucky enough to gain access to the final into ecstasy.

One of the first to congratulate him was Messi, who had few chances to make his mark amid the constant attention of yellow shirts but still posed a constant potential danger every time he touched the ball.

He and the entire Argentina team then breathed a collective sigh of relief minutes later when Di Maria, chasing an almost identical ball, appeared to injure his ankle after treading awkwardly on the Maracana turf. Thankfully for a man who has suffered so many injury woes in international colours, it proved a momentary scare.

Proof, perhaps, that the Albiceleste’s final fortunes were finally turning?

Despite going behind, Brazil coach Tite altered his rigid scheme, freeing up Neymar with the arrival of Roberto Firmino and pushing slightly more forward. The threat from the reigning champions in turn grew: six minutes into the second period Richarlison thought he had levelled with an opportunistic rebound finish, only to see play brought back for offside.

Seconds later, Argentina’s penalty hero Emiliano Martinez came to the rescue, stopping from the Everton forward who had begun to revel in the space behind left-back Marcos Acuna. The Albiceleste defence, erratic at the best of times, creaked and croaked, but just managed to stay in one piece, to the frustration of the expectant hosts.

Messi nevertheless continued to scurry and scamper past defenders, ensuring that Brazil could never take their eye off the back as the minutes ticked by. And for once in a Copa final he did not find himself fighting the good fight, as Di Maria and the magnificent De Paul provided the company he longs for. Indeed, the new Atletico Madrid signing almost notched a second assist when he set Leo clean through on the break, only for the star to see the ball catch under his usually deadly feet and Ederson dive in to clear up. Despite all appearances to the contrary, he is human after all.

The final whistle ultimately came without Messi managing to stamp his unique mark on the final. But he could not care a jot. The joy on the captain’s face was uplifting after so many heart-breaking defeats in international football, and perhaps nobody in the game deserved this more than him.

After almost 20 years and four finals La Pulga is the champion of South America, the emblem of a young, confident Argentina team who make up for their lack of star power with an unshakeable sense of solidarity and unity. But without Messi, their path to Maracana glory would have been far less clear – now, his place alongside Diego Maradona and the rest of his nation’s greats is sealed.