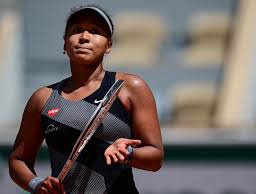 Japanese star Naomi Osaka crashed out of the Olympics tennis competition on Tuesday after Flora Duffy delivered gold for Bermuda for the first time in the tiny island’s history.

Osaka, who lit the Olympic cauldron in last week’s opening ceremony, produced an error-strewn performance in losing 6-1, 6-4 to Marketa Vondrousova, ending her cherished dream of winning on home soil.

The 23-year-old — one of the faces of the Tokyo Games — had not played since May, when she walked out of the French Open saying media commitments were harming her mental health.

The second seed, who was broken five times in the match, will be bitterly disappointed at missing out on a chance of Olympic gold, especially as world number one Ashleigh Barty lost in the first round.

Triathlete Duffy won the first gold of the day in the women’s event, making Bermuda the smallest territory or nation in terms of population to win a gold medal at a Summer Games.

The 33-year-old timed 1hr 55min 36sec to come home more than a minute ahead of Britain’s Georgia Taylor-Brown, with American Katie Zaferes taking the bronze.

For Duffy it was a welcome reward after persistent injuries and a diagnosis of anaemia in 2013.

“I have achieved my dream of winning a gold medal, but also winning Bermuda’s first gold medal,” she said.

“It’s bigger than me and that’s a really cool moment. That was the longest kilometre of my life (the final one of the run).”

Elsewhere, swimming powerhouses Australia and the United States won one gold medal each in the morning pool session and are on three golds apiece.

McKeown, who shattered Smith’s world record last month, flew through the water at the Tokyo Aquatic Center to touch in 57.47 seconds, a new Olympic record and only fractionally outside her own world best.

Smith had to settle for third behind Rio Olympic bronze medallist Kylie Masse of Canada.

McKeown, who lost her father last year to brain cancer, said: “It’s not necessarily what I’ve been through. Everyone has a journey of their own and it just so happens that mine’s been a really tough one.”

King was stunned by 17-year-old compatriot Lydia Jacoby, who swam a scintillating final 50m to touch in 1:04.95 and edge her into bronze, with South Africa’s Tatjana Schoenmaker taking silver.

Britain’s Tom Dean came back from two bouts of coronavirus to edge out team-mate Duncan Scott and win the 200m freestyle.

“I contracted Covid twice in the last 12 months,” he said. “It’s unheard of. When I was sitting in my flat in isolation, an Olympic gold seems a million miles off, but here we are.”

Later, all eyes will be on US gymnastics star Simone Biles in the women’s team final as the 24-year-old four-time Olympic champion seeks to erase the memory of an uncharacteristically error-strewn qualifying competition.

Biles made mistakes on floor and vault on Sunday and the other Americans followed suit as they failed to post the top score of the day for the first time at a world championships or Olympics since 2010.

The US women came to Tokyo as firm favourites but Biles admitted to feeling the pressure in an Instagram post on Monday, saying “I truly do feel like I have the weight of the world on my shoulders at times.”

With spectators banned from the gymnastics and most events at the Games to protect the Japanese public from coronavirus, Biles does not have a crowd to inspire her.

But it would be a huge shock if she failed to win a fifth gold to kick off her attempt to equal or surpass Soviet great Larisa Latynina’s record of nine gymnastics titles.