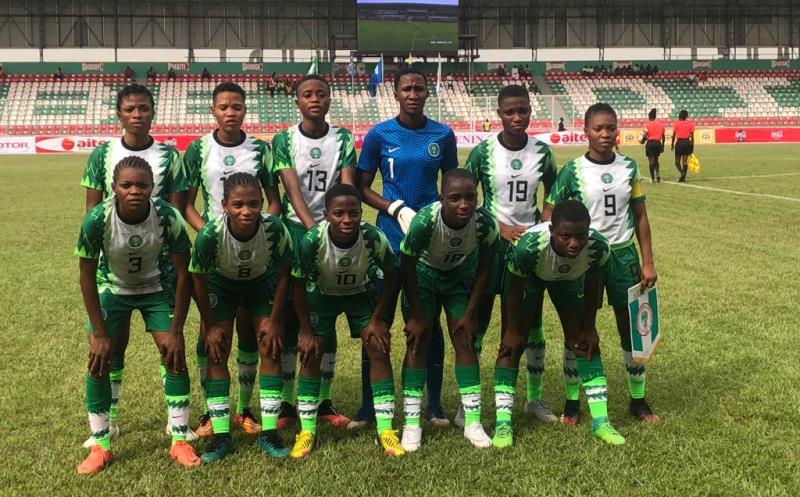 The General Secretary of the Nigeria Football Federation (NFF), Dr Mohammed Sanusi has commended players of the U17 Girls, Flamingos for their qualification for this year’s FIFA U17 Women’s World Cup, following a 1-0 aggregate defeat of Ethiopia in the final round of the series.

On Saturday, at the MKO Abiola National Stadium, Abuja, the Flamingos drew 0-0 with their Ethiopian counterparts to pick the ticket to India on a 1-0 aggregate.

Ghana’s Black Maidens ended up in tears as they lost out to Morocco’s U17 girls on penalty shootout in their final leg in North Africa. The Maidens won the first leg 2-0 but lost 2-0 in Morocco in the return leg on Saturday, and the hosts then won the shootout that followed. Nigeria and Morocco are likely to be joined by Tanzania, who hosted Cameroon on Sunday, having already won the first leg away 4-1.

“The qualification of the Flamingos to the FIFA U17 Women’s World Cup, which follows the qualification of the U20 girls, Falconets for their own FIFA World Cup taking place in Costa Rica, underscores our attention and investment in the women’s game. The good outings of the girls are also positive messages to the girl-child in Nigeria that they can always succeed in what they do once they work hard, focus hard and approach things with diligence. I want to use this opportunity to assure Nigerians that the NFF will ensure the two teams are adequately prepared for the global challenges in India and Costa Rica respectively.

“I have no doubt that the Super Falcons, who are campaigning in the Women AFCON next month where they are also seeking FIFA World Cup ticket, will earn their own World Cup qualification as well as retain the AFCON title.”

The Super Falcons will commence their AFCON camping programme in Rabat in a fortnight, ahead of the competition that will take place in Morocco 2nd – 23rd July. All four semi finalists in Morocco will be eligible to represent Africa at the FIFA Women’s World Cup in Australia/New Zealand next year summer.

The Falconets will participate in the FIFA U20 Women’s World Cup that takes place in Costa Rica 10th – 28th August, while the Flamingos will be one of Africa’s flag-bearers at this year’s FIFA U17 Women’s World Cup finals in India 11th – 30th October.