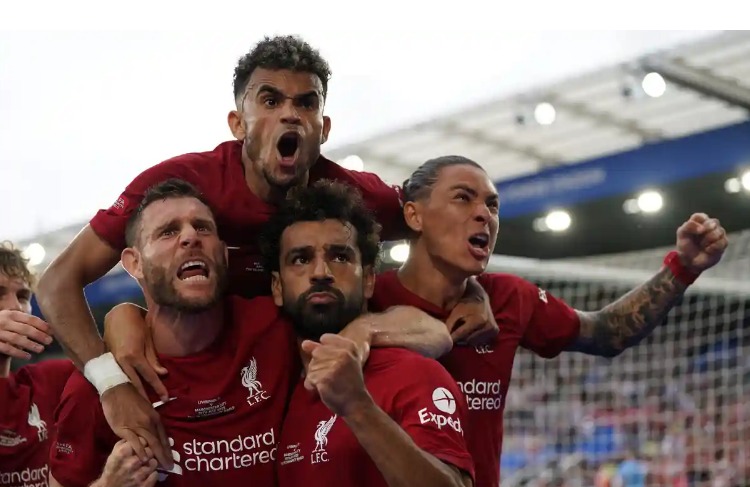 As an augury of the new season Liverpool will be the happier as Jürgen Klopp’s side already appear a slick team ready for serious combat.

Manchester City do not. Pep Guardiola may not care about losing this first ever Community Shield staged in July but may be concerned about how Erling Haaland was near-anonymous throughout.

The No 9’s one moment came when igniting the move that led to Julian Álvarez’s equaliser – and his first in Manchester City colours – and he ended with the type of point-blank glaring miss that may haunt.

In a raucous atmosphere at a packed King Power Stadium, Salah was the star of the opening half, a fizzing presence along the right who would create Trent Alexander-Arnold’s opener.

The Egyptian’s opening gambit was to sell a dummy and shoot. He found only the side-netting but City had a warning they failed to heed as too often the No 11 was allowed to receive passes and wreak havoc.

Seven minutes had about gone when Guardiola offloaded a first rollicking of the term. João Cancelo was the target for going back toward goal instead of finding Jack Grealish with an escape ball up the left.

City were being swamped so when Kevin De Bruyne forced a corner on the left and the same player took the short delivery and curled in a cross Nathan Aké could, at last, threaten Adrián’s goal, though he failed to connect.

Aké was Guardiola’s surprise selection for the day – the Catalan often has one – as the Dutchman nearly sold to Chelsea was preferred to John Stones.

Aké, though, was part of a rearguard that struggled to stymie Liverpool. A prime instance of Salah’s freedom came when he controlled and dinked the ball inside to Alexander-Arnold. The right-back, seeing Andy Robertson move towards the far post, executed a chip to the Scot who, racing in, should have finished.

All of the noise emanated from the red section of the venue, all of the action on the pitch from those in the same colour. Thus, when Alexander-Arnold struck there was scant surprise. Yet again Salah was found – this time by Thiago Alcãntara. And, yet again, the right-back awaited to his left: Salah tapped the ball to him and a bending shot beat Ederson via Aké’s forehead.

City, stung, had De Bruyne soon running in on to Riyad Mahrez’s threaded pass but the Belgian missed. Haaland, at this juncture, was a non-factor, limited to the odd touch and zero chances. Finally he had two chances. After bundling Robertson aside he made Adrián save but then, in the same passage, appeared awkwardly one-footed when mis-hitting a cross with his left foot when the angle was made for his right.

City rallied as the interval neared, closing the 45 minutes how they would want: controlling ball and territory near Liverpool’s goal. But no equaliser came – a Mahrez pea-roller that was simple for Adrián to collect an image of their toothlessness.

When the teams were named Haaland had been the one summer signing in the XIs, which meant Kalvin Phillips and Álvarez, Guardiola’s other fresh recruits, were replacements, as were Klopp’s new men – Darwin Núñez and Fábio Carvalho.

If each manager made no changes for the second half, Liverpool were soon, once more, carrying the threat. From a free-kick claimed on the left Robertson dropped the ball into City’s area before Aké, leaping, headed clear. Next the menacing Alexander-Arnold marauded toward Ederson and was repelled near the six-yard box, Robertson crashed in a cross, and Jordan Henderson looked to nip in along the right before turning back into traffic.

Guardiola now made a move by making two switches – the ineffective Haaland might have been one but he escaped – as Grealish and Mahrez were hooked, Phil Foden and Álvarez entering. At this juncture Roberto Firmino was also sacrificed – by Klopp – for Núñez so the top two rivals each now had their new top-gun marksman in action.

What was a surprise was how static City were with Haaland in the ranks: Guardiola, on this evidence, has lost the fluid attacking play that has been so scintillating and successful for City due to the Norwegian’s reluctance to drop off the front.

That was until the equaliser when Haaland did precisely this – finding space and passing to De Bruyne. His cross was volleyed by Foden at Adrián and when the forward challenged the keeper the ball squirmed to Álvarez whose strike stood – after a lengthy check for offside.

But now came a second VAR inquest: Craig Pawson was sent to the pitchside monitor and adjudged that Ruben Días handled Núñez’s header.

Salah coolly scored the penalty before Núñez sealed the win in stoppage time.