It was a moment of excitement, fun and relaxation as Clarence Seedorf, a Dutch iconic footballer with four Champions League laurels, alongside former Super Eagles Captain, Jay-Jay Okocha, and Afrobeats superstar, Davido, all featured in the Heineken Face-off, a novelty match that was held at Landmark Beach as part of Heineken UEFA Champions League Trophy Tour presented by Heineken®.

The game which lasted about an hour saw Team Heineken take on Team Nigeria in an encounter that showcased some classy football skills from both sides.

The game which was filled with fun moments saw the over 500 fans treated to an entertaining display with Okocha finding the net with almost every shot he took and Clarence Seedorf showing why he is called the Professor after hitting the woodwork twice and finding the back of the net twice.

Seedorf who is en route to Abuja will embark on a city bus tour across Nigeria’s capital city, meet with fans and also watch the Liverpool vs Benfica match at the Transcorp Hilton.

Abuja football lovers will get a chance to meet and engage with global legend and the trophy just like the fans in Lagos did. 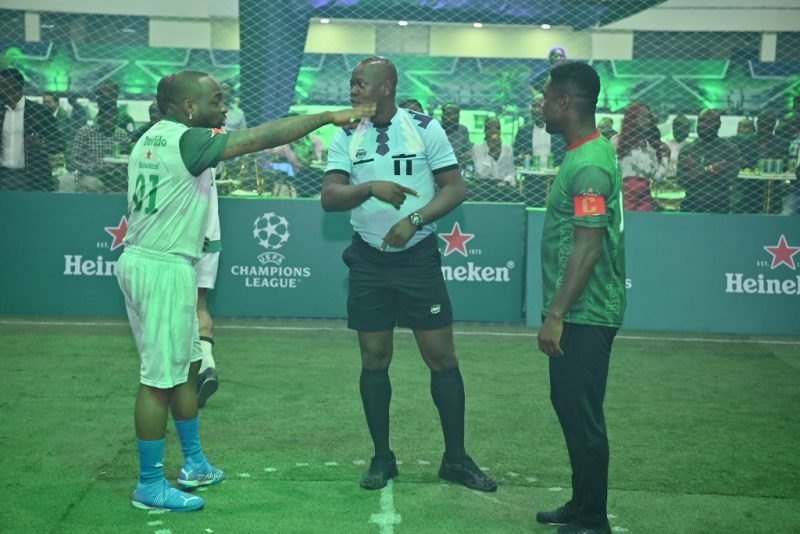 It was developed to enable fans globally to have the chance to get closer to the UEFA Champions League competition and the trophy itself.