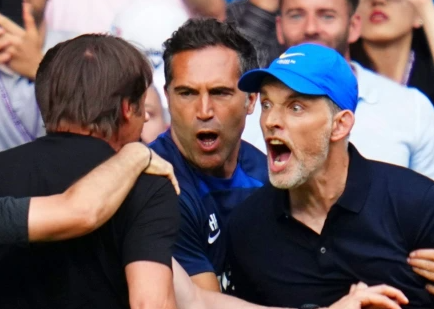 Chelsea boss Thomas Tuchel feels both of Tottenham’s goals in their dramatic 2-2 draw at Stamford Bridge should have been disallowed and believes referee Anthony Taylor should never officiate his side again.

Tuchel, who was sent off along with Tottenham counterpart Antonio Conte after the final whistle following their second fracas of the afternoon, was incensed that Kai Havertz was not awarded a free-kick in the build-up to Tottenham’s first equalising goal.

Cristian Romero then avoided punishment deep into injury-time for pulling Marc Cucurella’s hair with VAR Mike Dean ruling out a red card. From the subsequent corner, Harry Kane headed in to snatch the draw.

Chelsea fans have long claimed an agenda from Taylor against the Blues following a string of decisions against them in previous games.

Asked whether Taylor should never referee Chelsea again, the German replied: “Maybe it would be better.

“But honestly, we also have VAR to help make the right decisions. Since when can players be pulled at their hair? Since when is that? And if he does not see it, I don’t blame him.

“I didn’t see it, but we have people at VAR who check this and then you see it and then how can this not be a free-kick and how can it not be a red card? How?

“This has nothing to do with the referee in this case. If he does not see something, that’s why we have people to check if there’s a decisive error going on.”

When asked about Chelsea supporters’ concerns over Taylor’s officiating, Tuchel replied: “I don’t think that just some of the fans think that: I can assure you that the whole dressing room of us, every person thinks that.

“Not only the fans. You know the players, they know what’s going on when they are on the pitch. They know it.”

Asked if the players are worried when Taylor is in charge, Tuchel added: “Yeah, of course.”

And when it was put to him that he will most likely face a touchline ban for next weekend’s visit to Leeds, Tuchel said: “So good! I cannot coach but the referee can whistle the next game.”

Tuchel could find himself in further trouble, with the Football Association set to investigate his post-match comments.

FA guidance states that post-match comments in the media or on social media are permitted if they solely criticise a match official’s performance or competence, but that if comments imply bias, attack their integrity, are personally offensive, prolonged, or particularly unreasonable it could lead to the FA issuing a charge.

The FA will also study the referee’s report and match footage before deciding whether to charge Tuchel and Conte following their clashes on the touchline, with a decision expected before Wednesday evening.

However, Romero will not face retrospective action after pulling the hair of Cucurella because the incident was looked at by VAR.