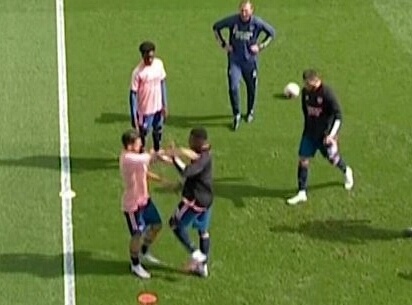 Dani Ceballos and Eddie Nketiah were involved in a heated clash during the warm-up for Arsenal’s Premier League opener against Fulham.

The Gunners duo, who are both on the bench for the trip to Craven Cottage, were caught angrily pushing and shoving after a fallout during a training drill.

Nketiah appeared riled by a strong challenge from Ceballos, who then pushed his teammate away.

The ball then makes its way back to Nketiah, and the pair square-up to each other.

Arms begin to flail before their fellow substitutes got involved to calm things down.

Rio Ferdinand, working as a pundit for BT Sport, played down the incident.

He said: “Sometimes it gets heated, you’ll see that once or twice a week at the training ground.

“It just so happens we’ve been here to see it.

“I wouldn’t be too disappointed with that.”

Instead, Mikel Arteta sprang a suprise by naming Mohamed Elneny in midfield, while Alexandre Lacazette started up front despite rumours of a potential move away from the Emirates.

Nketiah and Ceballos were both sat at opposite ends of the bench as they came out for the first-half.