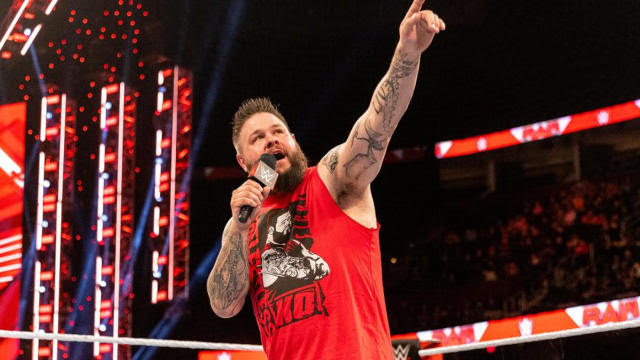 With less than one week to go until WrestleMania, WWE landed in Pittsburgh for the go-home edition of Raw on Monday night. Both Brock Lesnar and Roman Reigns were in attendance ahead of their title vs. title WrestleMania main event but neither man did more than deliver a promo.

As expected, Lesnar and Reigns both vowed to win their match to become unified champion. Lesnar, however, did not attempt to hunt down Reigns as he had on so many recent editions of SmackDown. Instead, he simply delivered a message to Reigns that he would be the man to leave Dallas as a double champion on Sunday night. Reigns, of course, disagreed.

CBS Sports was with you all night with recaps and highlights of all the action from PPG Paints Arena in Pittsburgh.

Brock Lesnar opened the show with an in-ring promo in full babyface mode. Lesnar played to the crowd before telling Roman Reigns that their two belts would marry and have a baby at WrestleMania, the unified championship. Lesnar made it clear that he would be leaving WrestleMania with “sole custody” of the title.

Reigns would show up for his own promo later in the evening. Reigns said he’s done everything you can do in wrestling except beat Lesnar at WrestleMania. Lesnar, he pointed out, beat him at WrestleMania in 2018, causing him to bleed to the point where his family couldn’t recognize him. Reigns responded by doing everything Lesnar has done but doing it better, breaking his record for longest run as universal champion and bloodying him at the recent live event from Madison Square Garden. If Lesnar thinks this is a game, Reigns said, he’d simply take Lesnar’s title and show him that it is personal.

Most of Raw felt like treading water to get to WrestleMania. The Lesnar and Reigns promos were probably the best examples of this. Both men appeared and said the same stuff they’ve been saying for months and had no actual interaction. That’s to be expected given that it’s normal to keep your big main eventers to limit how often they touch before WrestleMania but somewhat out of line with how determined Lesnar has been to get his hands on Reigns during basically every recent episode of SmackDown. It’s WrestleMania season, so there’s plenty to be excited about, but the two men could have been given a bit more to do. Grade: C+

What else happened on WWE Raw?

Rey Mysterio def. The Miz via pinfall. The match came after a Miz promo cut while Logan Paul wore the mask the duo stole from Mysterio last week. Despite Dominick Mysterio being ejected from ringside for attacking Miz and Paul, Rey was still able to get the win.

Vince McMahon gave Seth Rollins a spot at WrestleMania. Rollins visited McMahon at his office at WWE headquarters and was told the event couldn’t be stupendous if he was left out. McMahon declined to tell Rollins who he would face and that he would only find out in the ring at WrestleMania.

Omos def. The Viking Raiders via countout in a handicap match. Omos put down Eric with a clothesline, sending him outside the ring for the count out before also delivered a kick to Ivar’s face after the match.

Bobby Lashley returned to Raw, confronting Omos. As Omos was asked if there was anyone he felt was a threat in the locker room, Lashley made his return. Lashley was initially manhandled before finally dropping Omos with a shoulderblock. A furious Omos pointed at the WrestleMania sign, a gesture returned by Lashley.

Reggie and Akira Tozawa proposed to Dana Brooke and Tamina, respectively. Both women accepted their opportunity for a “WrestleMania Moment.”

Sasha Banks, Naomi, Liv Morgan & Rhea Ripley def. Carmella, Queen Zelina, Natalya & Shayna Baszler via pinfall after Ripley hit Zelina with Riptide. The heels had the match won when they began arguing over who would get the final pin, leading to the faces taking over on Zelina for the finish.

Austin Theory def. Ricochet via pinfall with the ATL.

Bianca Belair cut off several chunks of Becky Lynch’s hair after Lynch attempted to attack Belair during a promo. Lynch was ready to cut off Belair’s hair when Belair came back with two KODs before grabbing the scissors and repeatedly cutting Lynch’s hair.

Drew McIntyre def. Happy Corbin & Madcap Moss via pinfall in a handicap match. Corbin refused to tag into the match, having Moss do the work, which led to Moss losing quickly. Corbin jumped McIntyre after the match and then stole McIntyre’s sword.

A pre-recorded Edge promo aired explaining his motivations for attacking AJ Styles last week and effectively “choosing” to face Styles rather than Seth Rollins at WrestleMania. Styles responded to the promo by saying that Edge had gotten in his head but only because he couldn’t stop thinking about getting even.

RK-Bro def. The Usos via disqualification after interference from The Street Profits. The main event ended on the interference, leading to Rick Boogs and Shinsuke Nakamura to also attack The Usos. RK-Bro ended the night standing tall, taking out the Profits with multiple RKOs before celebrating together to end the final pre-WrestleMania edition of Raw.