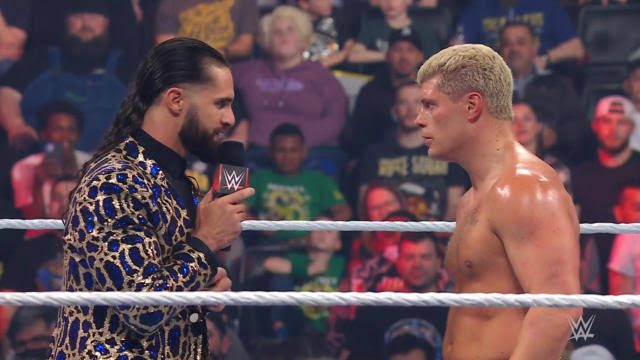 WWE Raw advertised Cody Rhodes vs. The Miz in Rhodes’ first match on WWE television since 2016, and AJ Styles vs. Damian Priest. In the latest name change, Austin Theory has not shortened his name to Theory. WWE Raw also saw The Usos continue their storyline from SmackDown as they defeated The Street Profits in the main event en route to a Tag Team TISI -2.2% Championship showdown against RK-Bro.

Miz vs. Cody feels like a the only wrestling feud that was booked inside a Men’s Wearhouse.

Cody Rhodes no longer has a trap door, but instead he was immersed in downward smoke and had to stand right in the middle of a huge explosion. By the look on Cody’s face, the pyro might have been too loud.

Cody Rhodes asked “do I look the same to you?” which sounded like a trick question. Then he asked “what do you think I’ve been doing the last six years,” and surprisingly these people didn’t break out into an AEW chant.

The Miz checked Cody Rhodes after he said “championship belt” by saying “a belt holds up your pants!”

Veer absolutely obliterated Dominik Mysterio, sending him to the hospital. I love everything WWE is doing with Veer, using basic principles to build a monster heel.

A subplot brewing is the recent burial of Dominik Mysterio. He’s been booked like a job guy since WrestleMania.

The finish of this match came when Damian Priest took a knee, the lights shut off and WWE Raw went to commercial. That was the finish, I’m not making that up.

Cody Rhodes received another pyro-filled entrance as WWE used a whole show’s worth of pyro in on hour.

Seth Rollins walked out to watch Rhodes’ match, signifying their feud will indeed continue even after Rollins shook Miz’s hand.

Jerry Lawler was on commentary this week, which means more “sciatica” references.

This was baffling booking after Liv Morgan’s huge career victory over Sasha Banks last week. I guess WWE really needs to lean into this weak link storyline before the inevitable Rhea Ripley turn.

Rhea Riley couldn’t be bothered to corner Liv Morgan in this match, which will likely play into this loss.

MVP and Bobby Lashley Face Off

Bobby Lashley was being “whatted” early on during his promo, but this segment really picked up when he and MVP got into a very heated war of words, with both men screaming at the top of their lungs.

MVP referred to Rusev and Lashley as a “sawn-off runt and a wannabe TikTok star.”

How clueless are Akira Tozawa character if they lets R-Truth into their bachelor party, and then tell him where the bachelorette party is?

Following this match, Sonya Deville walked out to announce Bianca Belair’s next challenger, which made me think it had to be a big return.

Sonya Deville teased Alexa Bliss as Belair’s next challenger, and the crowd popped huge. The opponent turned out to be Deville herself.

I guess the Sonya Deville character got tired of screwing with Black women on SmackDown and decided to run it Black on Raw.

There’s a short list of WWE officials who have abused this much power and been able to keep their job, and Sonya Deville is on it.

The Usos couldn’t return to Raw soon enough, because I feel like I’ve been watching RK-Bro vs. Alpha Academy for at least a month straight.

The Uso’s battlecry is to “complete the mission.” They’re definitely winning those WWE Raw tag titles.

Randy Orton was wondering when the Usos would show up on Raw when they were literally in the main event segment last week.

The Usos def. The Street Profits

Randy Orton finessed his way out of a match against The Usos only to instigate a bait-and-switch where The Usos faced off against The Street Profits. This man is good.

The Usos have to be considered the overwhelming favorites in this match because they’re chasing the Raw Tag Team Championships and also The Street Profits are likely in their final days as babyfaces.