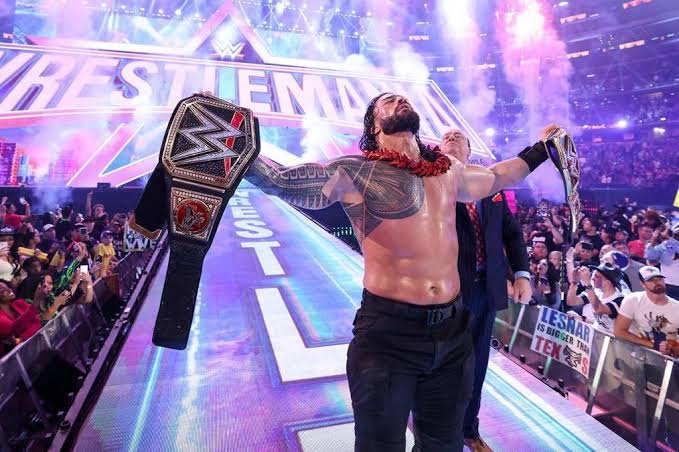 The captivating rivalry between The Usos and RK-Bro took an interesting turn with the additions of Reigns and Drew McIntyre. Paul Heyman, special counsel to the undisputed world champion, attempted to pressure authority figure Adam Pearce into making a six-man tag team match at WrestleMania Backlash. If he succeeds, the tag team titles may be unified in a match pitting The Bloodline vs. RK-Bro and McIntyre.

CBS Sports was with you all night with recaps and highlights of all the action from MVP Arena in Albany.

The Usos and RK-Bro met in the center of the ring to sign their contracts for a tag team title unification match at WrestleMania Backlash. Randy Orton and Riddle engaged in some trash talk with Jey and Jimmy Uso as authority figure Adam Pearce watched on. Tension boiled over as The Usos dove over the table and a brawl ensued.

McIntyre stormed the ring, clearing out the SmackDown tag team champions and staring down the undisputed world champion. Reigns took the bait, entering the ring and promptly receiving a belly-to-belly suplex from McIntyre.

WWE announced after SmackDown that the six-man tag team match was official for WrestleMania Backlash; however, no mention was made of the tag team titles.

An interesting, meaningful development in the tag team title unification match between The Usos and RK-Bro. The believable, intense performances delivered by the four men thus far have made the tag team division feel more important than it has in ages. The additions of Reigns and McIntyre may ultimately harm the final product. For now, it is an interesting wrinkle to the story. Riddle beat Jey and Jimmy Uso in one-on-one matches on the previous two episodes of SmackDown. Reigns, who demanded The Usos unify the titles in the first place, may not have faith in his cousins’ chances. What better way to assure The Bloodline’s continued success than to insert himself into the equation. Heyman trying to strong-arm Pearce further exemplifies Reigns’ desperation. Solid stuff. Grade: B+ unless the tag team titles are no longer being contested, in which case: C-

What else happened on WWE SmackDown?

Drew McIntyre def. Sami Zayn via pinfall in a steel cage after hitting a Claymore.

Ricochet (c) def. Shanky via pinfall with a sunset flip to retain his intercontinental championship.

Sheamus def. Kofi Kingston via pinfall after dropping him with the Brogue Kick. This was an impromptu match. Afterwards, Holland powerbombed Woods through a table set up outside.

Lacey Evans opened up about being kicked out of home, finishing high school and joining the military in a new video package.

Ronda Rousey def. Shotzi at 1:41 into their Beat the Clock Challenge “I Quit” match.

Charlotte Flair failed to defeat Aliyah within 1:41. As a consequence, Rousey won the Beat the Clock Challenge. An irate Flair attacked guest timekeeper Drew Gulak after the match.