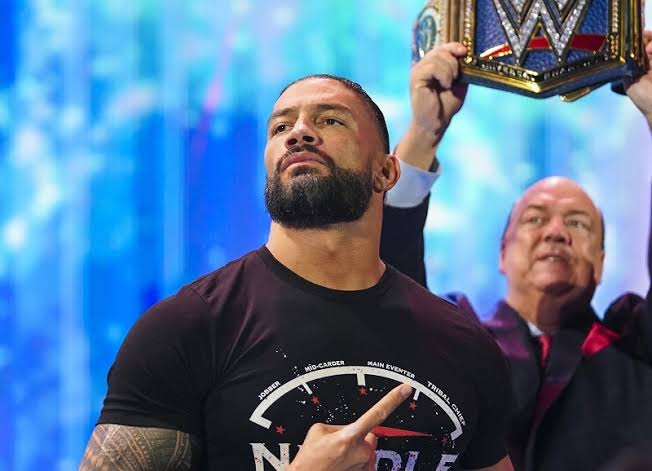 It was another busy night for WWE with last night’s Friday Night SmackDown with just two weeks between now and WrestleMania.

Universal Champion Roman Reigns opened the night by informing the WWE Universe that Brock Lesnar would not be at SmackDown, stating that it was probably a good thing for The Beast or else Reigns would have to smash him like he planned to do at WrestleMania.

The Head of the Table was ready to soak in the admiration of the WWE Universe, but his gloating was cut short as Paul Heyman informed him that Lesnar was on his way, leading The Bloodline to quickly slide out of the ring to make their exit.

After Roman Reigns claimed he was going to smash Brock Lesnar at WrestleMania, The Bloodline were set to exit the arena when The Beast crashed into the side of their SUV with a forklift.

An incensed Lesnar chased after Roman Reigns, who hopped into a nearby truck. Lesnar tore off one of the doors, but he failed to gain any retribution as Reigns sped away. Lesnar took his frustrations to the ring, stating Reigns had awoken “The Bipolar Beast” and he was coming for blood.

As Angel & Humberto took control of the match, Boogs tagged in and manhandled both members of Los Lotharios, showing off his superior strength before planting Angel with a Boogs Cruise for the pinfall.

Drew McIntyre and The Viking Raiders got payback on Happy Corbin, Jinder Mahal, and Shanky following last week’s surprise attack, laying waste to the trio and walking away victorious in their Six-Man Tag Team Match.

Happy Corbin did his best to avoid being in the ring with McIntyre, who decimated everyone in his path as Happy Corbin got out of dodge to avoid the onslaught. With Happy Corbin watching from ringside, McIntyre stared him down before leveling Shanky with a Claymore to earn the win.

After a massive tandem superplex powerbomb left all four competitors flat on the mat, Shayna Baszler & Natalya raced down to lay waste to everyone, resulting in a no-decision. As the four Superstars began to rally, the titleholders joined the fray to finish the job and stand tall with Baszler & Natalya.

In order to keep his job and his match at WrestleMania, Pat McAfee begrudgingly took to the ring to issue an apology to Austin Theory for last week’s attack.

Spurred on by a special pre-match message from Big E, who updated the WWE Universe on his injury status, Kofi Kingston dished out some punishment on the man who sidelined his friend: Ridge Holland.

Sheamus and Butch were ejected for interference, but before the pair reached the top of the entrance ramp, Kingston tossed Sheamus’ shillelagh at the two, setting off Butch.

Butch dove back into the ring only for Sheamus to grab him by the legs and drag him back out. As the referee tried to deal with the situation outside the ring, Holland took advantage and grabbed Kingston from behind, hoisting him up for the Northern Grit and the 1-2-3.

Charlotte Flair called out Ronda Rousey to finish what she started

SmackDown Women’s Champion Charlotte Flair reveled in her attack on Ronda Rousey last week, only feeling remorse for the fact that she couldn’t make her WrestleMania opponent tap out before being pulled off the hood of the car by WWE Officials.

Flair goaded Rousey to come to the ring so she could finish the job, and as the two battled onto the arena floor, Rousey cinched in the ankle lock.

Flair countered the submission by grabbing a Kendo stick and whacking Rousey to get free, using the weapon to put the former Raw Women’s Champion in a devastating submission hold before planting her through the announce table with a massive powerbomb.