WWE SmackDown Results: Winners, Grades, Reaction And Highlights From May 20 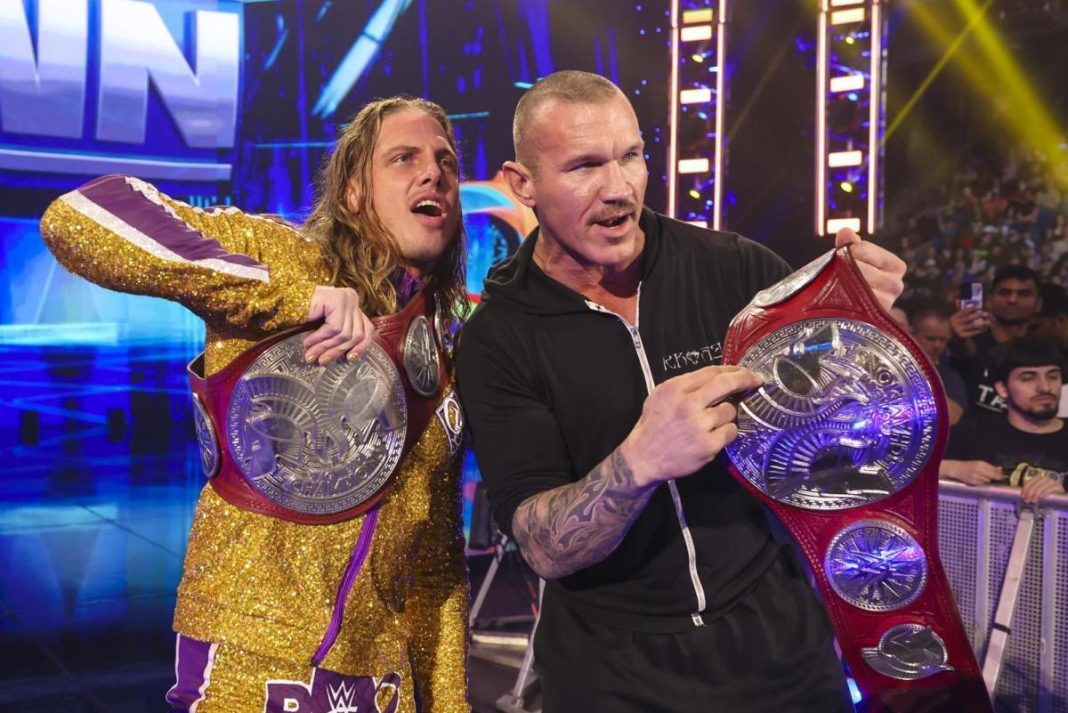 The much-anticipated bout, originally scheduled for the WrestleMania Backlash premium live event, not only made history, but it also headlined an episode that featured the latest in the rivalry between New Day and Fight Night, as well as a showdown between former intercontinental champions as Shinsuke Nakamura battled Sami Zayn.

Find out what went down Friday on Fox with this recap of the show, complete with grades, analysis and top moments from the night’s action.

The stakes became abundantly clear for The Usos in the night’s opening promo in which they remained silent but absorbed the words of Undisputed WWE champion Roman Reigns and special counsel Paul Heyman.

Heyman told the story of the Samoan Dynasty and The Bloodline’s place in it before revealing that if Jimmy and Jey are not successful in the night’s Winners Take All, Tag Team Championship Unification Match, they will no longer be welcome on the Island of Relevancy.

Reigns, forboding, warned his cousins that the expectations are high because of his love for them.

This was a great promo that took what was already a high-stakes match later in the show and elevated it even higher. Some will argue that putting that particular stipulation on the match tipped WWE Creative’s hand, and maybe it did. What it definitely did was create even more intrigue for a big-time match that probably should have happened at WrestleMania Backlash.

The sly grin on the face of Reigns as he embraced his cousins was one of those little things The Tribal Chief has perfected as a heel, and Heyman is an all-timer from performance and promo perspectives.

“Welcome to the single biggest night in the history of tag team wrestling,” Paul Heyman said to put over the significance of the night’s Winners Take All main event.

Heyman put over The Usos as descendants of The Wild Samoans, highlighting how not even Afa and Sika accomplished what Jimmy and Jey have the opportunity to do in the main event.

“The Usos will come home as the undisputed tag team champions or they won’t come home to the Island of Relevancy at all,” Heyman said, elevating the stakes of the battle with RK-Bro.

“The only reason I have these expectations is because I love you,” Reigns said before embracing his cousins.

After a particularly nasty fall by Nakamura from the top rope and to the floor, Zayn controlled the match.

Nakamura fought back but found himself barely staving off a countout. Moments later, Zayn found himself in the same position. The Great Liberator made it back to the ring but rushed right into the Kinshasa as the babyface earned the big win.

The match, like most between these competitors, was a lot of fun and had the fans in Grand Rapids biting on near-falls, including the two countouts. Nakamura winning made sense given the lofty creative plans that exist for him, while the loss continued to set Zayn up as someone trying to defend the honor of The Bloodline but repeatedly failing.

Where that story is going remains to be seen, but it feels safe to say Nakamura is likely up next for The Tribal Chief in what should be a damn good match, if nothing else.

Prior to the match, during Nakamura’s entrance, the former King of the Ring partook in a tense, momentary exchange with Roman Reigns as a match between them was once again teased.

The fall from Nakamura prior to the commercial was scary and looked all kinds of awkward.

The countout teases were great and played up the cowardly element of Zayn’s character.

Happy Corbin cut a seething promo on Madcap Moss, taking great pride in his actions from a week ago that landed his former associate in an ambulance. He destroyed the Andre the Giant Memorial Battle Royal trophy to put an exclamation point on the segment.

A week after enduring a wicked chop to the chest, Drew Gulak made the unwise choice to try his hand against “The Ring General” Gunther for a second time. It went about as well as expected, as the Austrian wiped the mat with the outmatched Gulak en route to a one-sided victory.

Ricochet made the save when Gunther applied a post-match Boston Crab, teasing a feud between the NXT exports. If that is the direction SmackDown’s writing team is taking the Intercontinental Championship, fans should be excited.

Ricochet is a fantastic wrestler whose main roster run has been tarnished by sub-par creative. Gunther is responsible for some of the best matches of this generation. Putting the bruiser against the high-flyer with one of the most storied championships in WWE history on the line is a great decision and one that should spawn several really strong matches.

If WWE books Ricochet to be competitive, that is.

Corbin broke the Andre the Giant Memorial Battle Royal trophy in a blatant display of disrespect.

Michael Cole rightly pointed out that the same trophy Corbin destroyed was instrumental in him breaking out on the main roster.