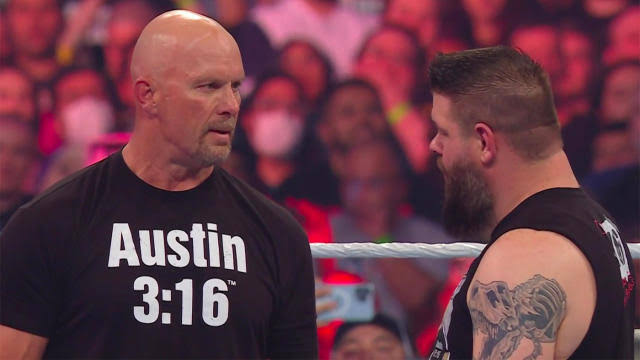 WWE headed to AT&T Stadium in Dallas, Texas tonight for night one of WWE WrestleMania 38, the biggest pay-per-view of the year.

As noted, WrestleMania is WWE’s biggest show of the year, so the company didn’t hold anything back with regards to bringing in top names for the show.

On the show was a huge Raw Women’s Championship match between champion Becky Lynch, and challenger Bianca Belair.

We also saw Charlotte Flair defend her SmackDown Women’s Championship against Ronda Rousey, competing in her first WrestleMania match since 2019.

Elsewhere on the card tonight, Seth Rollins faced Cody Rhodes, who made his shock return to the WWE after leaving the company in 2016.

We also saw Logan Paul imrpess fans with his performance as he teamed with The Miz in his WWE debut to defeat Rey Mysterio and Dominik.

The show was headlined by a KO segment between Stone Cold Steve Austin and Kevin Owens, which turned into a No Holds Barred match, Austin’s first match since 2003.

Below are all the results for the show, in case you didn’t match to catch what went down:

If you manage to catch the show today, you can watch the event in its entirety, including the kickoff show, right now on-demand on the WWE Network.