Groans as Telco’s Rip off Subscribers 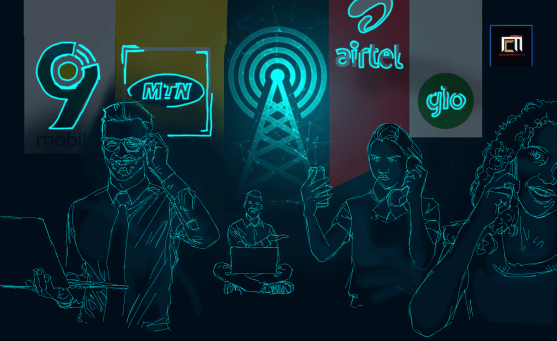 Data, to not a few subscribers of telecommunication companies in Nigeria, is life. This notion seems to have been capitalised on by the four major Telco’s in Nigeria, namely MTN, Airtel, Globacom and 9Mobile.

It won’t be out of place to say that a reasonable number of the Z-Generation dominates the virtual space to be informed, educated and entertained.

To them, the virtual space is for both work and play. Unfortunately, instead of putting strategies in place to make data experience worthwhile for consumers, Telcos in Nigeria are seemingly capitalising on the lacuna in the regulation of data consumption to rip off their customers.

For many, the situation has become even more worrisome. Worse still, there seems to be no solution in sight.

Without exaggeration, subscribers to services rendered by virtually all the Telco’s in the country have been lamenting how they are frequently being scammed by unjustifiably depleting data purchased from telecommunications service providers.

Among the victims of the smart practices is Mrs Sandra Okoye, the publisher of SIO247, an online news platform.

She said, “As an online journalist and publisher, I heavily depend on data availability. Sadly, my experience has been one of anguish. In fact, my experience is one that may interest the leadership of the Federal Competition and Consumer Protection Commission.

The situation has been so frustrating that as soon as I recharge, I will receive the following message from my service provider, ‘Your N5,000 monthly data plan has been successfully activated. Valid for 30 days.

“After receiving the notification, a few minutes later, another message would follow, ‘Dear customer, you have used up 95 per cent of your monthly data bundle. Within an hour, they would inform me that I have exhausted the remaining five per cent. The experience has become one of grave concern to me.”

Earlier this year, she reportedly reached out to the Customer Service department of the company, and the personnel that attended to her could not fathom the reason(s) behind the unwarranted deductions.

Hence, she was asked to come back on a later date, to enable her assign a technician to fix the problem. Okoye said, “I have, for the umpteenth time, been to their office over the same complaint, but they are yet to resolve it. As a result, I have been complementing their services with that of another telco. I am just fed up with this scam. If I can’t find solution to the problem, I may be compelled to dump the service provider for another.”

Sharing a similar experience with Financial Street, Andrew Eluma, said, “My experience with the network I subscribe to has been harrowing. Recently, I purchased and activated three gigabytes plan for N1,500. However, I did not utilise it, because I was using the office Wi-Fi. Thereafter, I was shocked to receive a message from my network provider that I had expended more than 2GB.

“The message read that I had 625 megabytes left. By evening of the same day, I was left with just 373MB out of the 3GB I activated in the morning. The situation, to me, is fraudulent.”

The prevailing data scam started as soon as Nigerians migrated from Blackberry to Android smartphones.

Between 2012 and 2013, Android-powered phones started flooding the Nigerian market. Blackberry data plans were comparatively cheaper and, to an extent, worked well for users.

At the time, not a lot of people were worried about data meters on their phones. In those days, all the BlackBerry user needed was to subscribe to one of the available plans, which remains valid till the end of the week or month.

Alas! That has changed with the coming of Android. When smartphones powered by Android Operating System started becoming popular in Nigeria, the dynamics of data usage changed.

The reason for the foregoing is that Android apps consume more data than Blackberry. Consequently, telcos capitalised on this seeming goldmine and created separate data plans for Android users. Nevertheless, increasing competition forced the big four to crash data prices.

But the reality on the ground has shown that the price crash is akin to robbing Peter to pay Paul.

Battered and bruised, Nigerians have continued to bear the situation. In fact, majority of Financial Street respondents claimed they would have preferred to abandon subscribing to data plans altogether.

But Nigerians need data to access social media which many, especially the youth, have become almost addicted to.

Bemoaning the situation, Edmund Imarhiagbe said, “The issue of social media addiction has become a global problem, although social media users in other parts of the world do not face the challenge of data scam Nigerians are currently subjected to. Telcos have also surreptitiously leveraged the almost-indispensability of data to the average Nigerians.”

Looking at the challenge, it appears no subscriber is immune, as a prominent consumer rights advocate, Mrs Sola Ajulo, wrote on her Facebook page, “Recall that I complained about data consumption on my MTN line about a week ago. A top official at Nigerian Communications Commission, who follows my page took up my complaint and NCC got involved.

“Within a few days, the NCC had obtained my call record and sent to me. I disputed the claim that apps on my phone consumed the data because from the record, the previous activation of the same 12GB lasted about four weeks. But this time, in three days, I had activated 12GB thrice, even without watching video?”

With her connection in NCC, the telco got in touch with her directly, apologised and refunded two of her activations (24GB. She added, “They showed me how to reset my data consumption and we are both monitoring to see if truly my apps were the culprit.

I reset cellular data to zero bytes on Wednesday.

“By Thursday, I consumed 701MB (less than 1 GB). After five days of the reset, I used only 6GB! This is because my broadband at home isn’t working, else I wouldn’t have used up to 3GB!

“I am very grateful to my Face[1]book friend here who took this up. I only wish the system would respond as promptly to it.”

The Executive Vice Chairman and Chief Executive Officer of NCC, Umar Danbatta, last year, said the reduction in the cost of data might not provide the lasting solution to the issue of data depletion, promising that the Commission would explore new measures to address the issue.

“NCC has instituted a forensic audit on the cost of data, just like we did with cost of Short Message Service on a particular mobile operator, where we discovered that the operator had ripped off its subscribers to the tune of N100m. This could have gone unnoticed, if not for the quick intervention of NCC. We have plans to even extend the forensic audit on SMS to other telecoms operators.

“So, we are doing same for data to find out the reason for fast data depletion and it will be carried out across all Mobile Network Operators. By the time the audit is completed and the result is out, perhaps we will have better information of what is happening in the data segment, as it relates to fast data depletion,” Dambatta said.

He said the Commission did its benchmarking recently and discovered that the cost of 1GB of data had come down below N500, which represents 50 per cent reduction from what it used to be, adding that there was, however, a target to reduce data cost to N390 per gigabyte by the year 2025.

The EVC said, “For us as industry regulator, this is a good sign that data cost is coming down and that the issue of data depletion, as experienced by subscribers, is gradually being addressed.