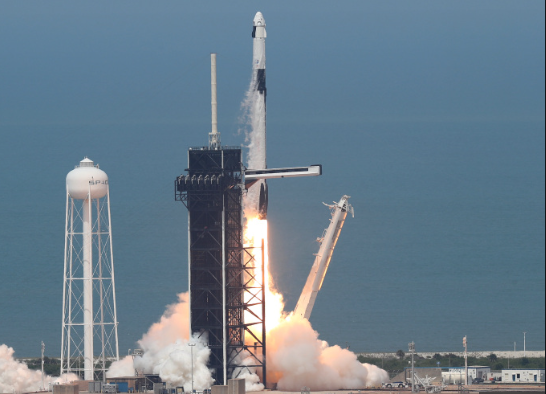 Two American astronauts are cruising to the International Space Station aboard a SpaceX capsule, forging a new landmark for NASA and visionary billionaire Elon Musk.

The milestone flight marked the first time that humans have traveled to orbit in a commercially developed spacecraft — and the first time American astronauts have flown from U.S. soil since the space shuttle program ended in 2011.

The Dragon capsule carrying NASA astronauts Bob Behnken and Doug Hurley is scheduled to arrive at the orbiting lab at 10:30 a.m. Eastern time on Sunday, about 19 hours after lifting off from Kennedy Space Center in Cape Canaveral, Florida. Approximately 10 million people watched the launch live.

“Today was just an amazing day,” NASA Administrator Jim Bridenstine said after the launch. “I’m breathing a sigh of relief, but I’m not going to celebrate until Bob and Doug are home safely.”

The launch comes 18 years after Musk founded Space Exploration Technologies Corp. with the ultimate goal of populating other planets.

President Donald Trump and Vice President Mike Pence were among those who gathered with Musk to watch the spectacle. Trump spoke with the two astronauts prior to the launch.

“They have a long way to go but that’s a very dangerous part of it there,” Trump said. “I’m so proud of the people, of NASA, public and private. When you see a sight like that, it’s incredible. When you hear that sound — the roar — you can imagine how dangerous it is.”

“Launching satellites is nice and we got to bring in more money than we spend, this is important, but ultimately this is life beyond earth,” Musk said at a briefing after the launch, where he recalled how he developed SpaceX with funds he got from PayPal. “Hopefully this is the first step on that journey” for “life becoming multi-planetary for the first time.”