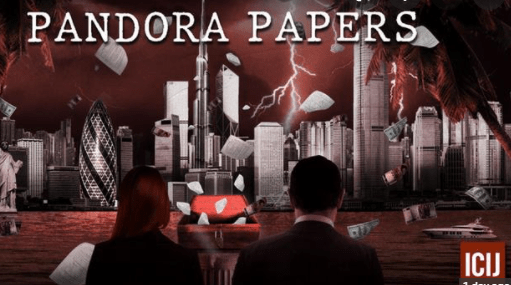 A global leak of nearly 12 million documents, dubbed the Pandora Papers, unlocks the financial secrets of politicians, billionaires and criminals.

The investigation is one of the biggest ever conducted by journalists and lays bare the global entanglement of political power and secretive offshore finance.

Here’s what you need to know.

What are the Pandora Papers?

That’s the name that’s been given to the more than 11.9 million financial records, containing 2.94 terabytes of confidential information from 14 offshore service providers.

They’re enterprises that set up and manage shell companies and trusts in tax havens and secrecy jurisdictions around the globe.

The International Consortium of Investigative Journalists (ICIJ) shared the files with 150 media partners and more than 600 journalists in 117 countries and territories who spent months combing through the files.

They uncovered the secret deals and hidden assets of more than 330 politicians and high-level public officials in more than 90 countries and territories, including 35 current and former country leaders

The documents span five decades, with most created between 1996 and 2020.

Are these offshore trusts and shell companies legal?

While owning an offshore company is legal, and there are some legitimate reasons to have one, the secrecy it provides can be a problem.

Reporting by the ICIJ and its partners has challenged the offshore industry’s claims that service providers judiciously vet clients and strive to act within the law.

Who are the big names included?

International media partners working on the ICIJ’s investigation found current and former world leaders who owned secret companies and trusts included: King Abdullah II of Jordan, the prime ministers of Côte d’Ivoire and the Czech Republic, the presidents of Ecuador, Kenya and Gabon and the former presidents of El Salvador, Panama, Paraguay and Honduras.

The ICIJ’s analysis of the files found they contained details of the secret offshore holdings of more than 130 billionaires from 45 countries, including 46 Russian oligarchs.

The documents include information on more than 29,000 ‘beneficial owners’ — those are the ultimate owners of offshore assets.

That figure’s more than twice the number found five years ago in the Panama Papers investigation, which was based on a leak from a single law firm.

This time there are 14 offshore service providers that operate from Anguilla, Belize, Singapore, Switzerland, Panama, Barbados, Cyprus, the United Arab Emirates, the Bahamas, the British Virgin Islands, the Seychelles and Vietnam.

Why should we care?

By some estimates 10 per cent of the world’s total economic output is parked in offshore financial centres, costing governments billions of dollars in lost revenue.

That’s money that could be spent on roads, hospitals and schools.

Experts say poor nations are disproportionately harmed by the stashing of wealth in tax havens, which starves treasuries of funds.

ICIJ director Gerard Ryle says the Pandora Papers reveal that some international leaders who could tackle offshore tax avoidance have themselves secretly moved money and assets beyond the reach of tax and law enforcement authorities as their citizens struggle.

“I think what we’re seeing here is a lot of hypocrisy,” he says.

“We’re now seeing the very people who could end the system themselves benefiting from it.

“I think what it shows really is that there is a shadow economy, a shadow world out there that we are not aware of, and that this is a world that is enriching the people who are already rich.”