Putin, Macron Agree To Hold Trilateral Talks “In The Next Few Hours” To Halt Escalation In Ukraine 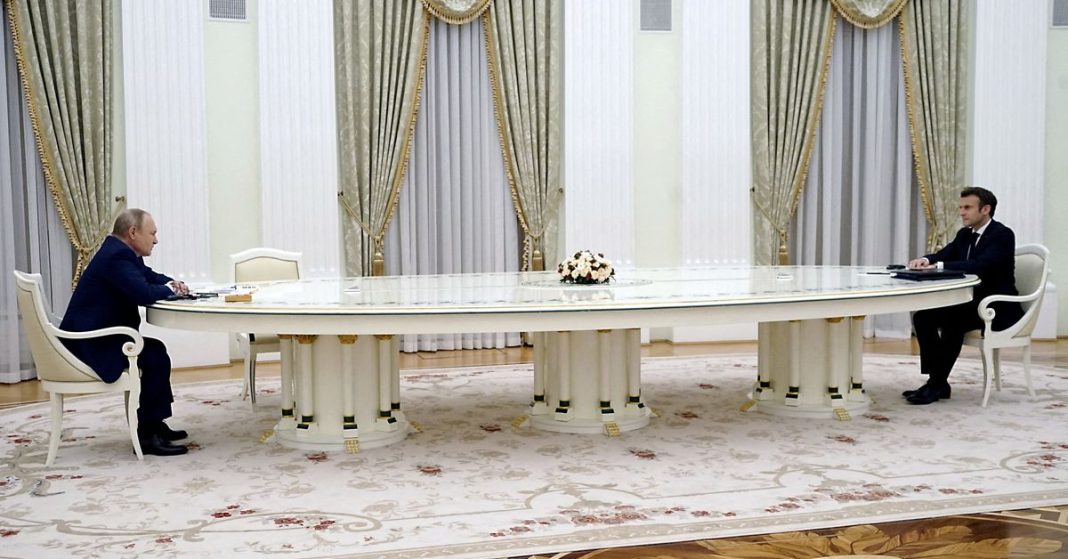 French President Emmanuel Macron and Russian President Vladimir Putin have agreed to take urgent measures to deescalate the situation in eastern Ukraine, the Elysee said in a Sunday statement which followed a phone call between the two leaders in which Putin also discussed his intention to withdraw Russian troops from Belarus.

Putin and Macron agreed to resume work within the ‘Normandy format’ – which will also include German and Ukrainian leadership – and will begin discussions “in the next few hours” in order to “obtain a commitment from all the stakeholders” on a ceasefire on the line of contact.

Meanwhile, a meeting between French and Russian ministers of foreign affairs, Jean-Yves Le Drian and Sergey Lavrov, will occur “in the coming days.”

“This diplomatic work should make it possible to progress on the basis of the latest exchanges by involving all the stakeholders (Europeans, allies, Russians and Ukrainians) in order to achieve, if the conditions are met, a meeting at the highest level in to define a new order of peace and security in Europe.”

The Kremlin has confirmed the statement, saying “it was agreed to continue contacts at various levels” but did not elaborate on specific details.

“Serious concern has been expressed over the sharp deterioration of the situation on the line of contact in Donbass. The President of Russia noted that the escalation has been caused by the provocations of the Ukrainian security forces,” reads the Kremlin statement.

According to Russia’s state-owned RT, Putin brought up “the ongoing pumping of Ukraine with modern weapons and ammunition” by NATO countries, which is pushing Kiev “toward a military solution to the so-called Donbass problem.” Because of the “intensifying shelling,” citizens in self-proclaimed breakaway republics in eastern Ukraine had to evacuate Russia.

If Macron achieves a diplomatic resolution with Putin explicitly by circumventing the US, the US will still claim credit despite Biden declaring he’s “convinced” that Putin has already “made the decision” to invade. Conveniently, nothing the US ever says re: Russia is falsifiable

The training exercises were scheduled to finish on Sunday and Russia had said it would return its troops to their bases afterward. While those drills are in Belarus, which is north of Ukraine, the defense ministry statement cited the deteriorating situation in eastern Ukraine for the extension. It also referred to increased military activity along the borders of Russia and Belarus, a likely reference to NATO’s recent deployment of more troops eastward. -Bloomberg

In recent days, fighting between Russian-backed separatists and Ukrainian forces in the Donbas region has escalated – with allegations of violations on both sides of a 2015 ceasefire. According to Ukraine, the separatist leaders are increasing the rate of attacks, including on civilian targets, to force a response and create a pretext for a Russian invasion. Donbas leaders say they’re responding to Ukraine firing on them.