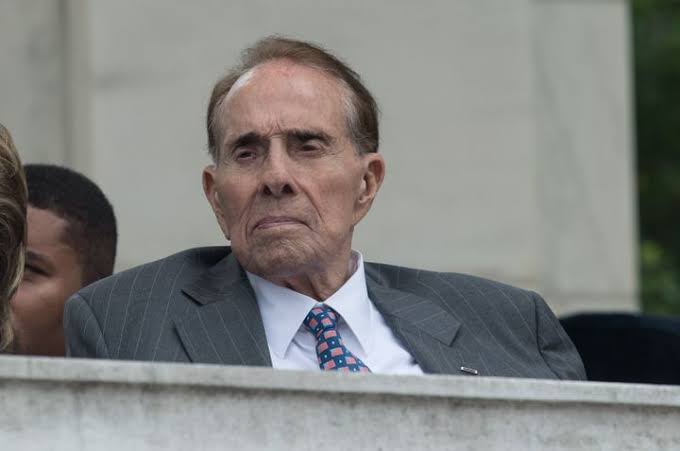 Bob Dole, a World War Two veteran who went on to be a long-time Republican senator and US presidential candidate, has died aged 98.

His death was announced in a statement from the Elizabeth Dole Foundation: “It is with heavy hearts we announce that Senator Robert Joseph Dole died early this morning in his sleep. At his death, at age 98, he had served the United States of America faithfully for 79 years.”

Earlier this year Dole had said that he was receiving treatment for lung cancer.

His political career was marked by a decade-long stint as the top Republican in the US Senate, and running unsuccessfully for the White House against Bill Clinton in 1996.

Despite his lack of combat experience, the young 10th Mountain Division lieutenant had been ordered to lead an attack on a German machine-gun post in northern Italy.

Three-quarters of his squad lay strewn on the battlefield. Running to help a fallen soldier, gunfire and enemy shells shattered Dole’s right arm and upper back.

Unconscious, an army sergeant rolled him to safety. He gave him a huge dose of morphine and painted an ‘M’ on his forehead – in Dole’s own blood – to stop passing medics giving a second, lethal hit.

“I gave him a shot because he’s gone,” the man told his commanding officer. “At least he’ll have some comfort.”

That Dole survived was a miracle. That he went on to rebuild his broken body, become the Republican Party’s longest serving senator and a presidential candidate was a tribute to his determination. Many believed the survival and determination were linked.

Robert Joseph Dole was born on 22 July 1923 and grew up in the Dust Bowl of Kansas during the Great Depression. It was a provincial childhood, 200 miles from the nearest midsized city. As a youth, Bobby only left Kansas once, on a fishing trip to the mountains of nearby Colorado.

His salesmen parents struggled financially – their four children sharing a single room – but preached the values of hard work and religious devotion.

They “taught me to put my trust in God, not government,” he later said, “and never confuse the two.”

There were no books at home. “Be a doer, not a stewer,” was the family motto – with Dole encouraged to play outside at every opportunity.

While his friends studied for college, Bob shot hoops and worked serving ice cream at a local drugstore.

At the University of Kansas, he studied medicine but did not treat college as a place to expand the mind. Intellectually lazy, he partied and became a star athlete, competing at basketball and football as well on the track.

Then came the war, Dole’s enlistment in the army – and the day that changed his life.

He lay near death for nine hours on that Italian battleground, with injuries including a fractured shoulder, a broken neck and spine, paralysis, a ruined kidney and bits of shrapnel. The hidden iron in his soul had, fortunately, been left intact.

For his service, he was awarded two Purple Hearts and a Bronze Star but the hardest battle was yet to come. More than three years were spent in recovery, stuck in a sterile hospital room in Michigan fighting off boredom, blood clots and infections that nearly claimed his life.

Facing amputation of his arm, he was fortunate to encounter a maverick surgeon who performed multiple operations, free of charge. Dole credited him with an impact on his life second only to his family.

Demoralised and robbed of his ability to lead the outdoor life he loved, Dole began to read. Unable to hold the books, he used a projector to beam the pages on to the ceiling above the bed.

He devoured the works of Plato, George Washington and, his favourite, Abraham Lincoln. “It was a way to maintain sanity, I guess,” he said.

He met an occupational therapist, Phyllis Holden, and took her to an officers’ club dance. Three months later they married – despite the objections of her parents who believed Dole was in no fit state to care for her. She shook him out of his “funk”.

Returning home, they rigged up a rope-and-pulley system to build up his strength. He kept it there for more than half a century, to remind him how far he had come.

He never regained use of his arm and right hand, spending the rest of his life limply holding a pen to discourage innocent offers of a handshake. What he lacked physically, however, he now made up with drive.

Unable to write notes, he recorded law school lectures and stayed up all night transcribing them left-handed. He could only write brief notes in his final exams, but they were sharp enough to pass.

Encouraged to enter politics, Dole took advice. He was a moderate but saw sense in the argument that “if you want to do something politically in Kansas, you’d better declare yourself a Republican”.

In 1950, he was elected to the state legislature with the help of a campaign featuring a female singing group, Dolls for Dole.

A decade later, he made it to Washington as a member of the House of Representatives for a rural area of Kansas that had only just permitted alcohol and saw a ‘commie’ under every rock.

Politics began to consume him, building a reputation as the conservative his district expected. The family made the long drive home each summer in a car crammed with pets and luggage. One year their dog died from the heat.

In 1968 – the same year Richard Nixon became president – Dole reached the Senate. But his dedication to politics took a toll on his marriage and at the end of his first term, he divorced.

His decision to leave Phyllis shocked her. But, in the course of their last year together, Dole had eaten just two meals with his wife and daughter. It is a measure of the degree to which politics now obsessed him that he consulted Nixon about potential damage to the Republican Party before informing her.

By 1972, he was Republican national chairman and with a new partner, Elizabeth Hanford, who shared his enthusiasm for politics. They married three years later.

Elizabeth Dole would later become Ronald Reagan’s secretary of transportation and eventually won a seat in the Senate herself.

With a reputation for blunt speaking, Dole became incumbent Gerald Ford’s vice-presidential running mate in 1976, but they lost. During the campaign Dole blundered in the debate against his opposite number, Walter Mondale, describing America’s 20th Century conflicts as “Democrat wars”. It was a phrase that would come back to haunt him.

Public speaking was his weakness as a politician: he was naturally taciturn, couldn’t physically write speeches and was loathe to rehearse or read words others had written.

He was a natural in the House and Senate; at the backend of politics he could do deals, make trade-offs and build consensus. Out front – in the bear-pit of a national election – he lacked the magic ingredient required for success.

Jimmy Carter, Reagan and later Bill Clinton had the common touch and easy delivery that Dole could never muster. On the stump, they were fluent but he was staccato, with speeches riddled with random cliches.

Nor did he have the thing Americans call “vision”. His personal story was the stuff of presidents but when asked what he wanted for the country, he struggled – responding with vague fatuities and empty slogans.

In 1988, when George HW Bush beat him in the New Hampshire primary, he boiled over on television and demanded his opponent “stop lying about my record”.

He was irritated at Bush’s campaign ads and constant posing for the cameras, with photocalls driving trucks and shovelling snow. Dole knew he physically couldn’t do the same and the frustration made him snap.

He nursed his grievances in the Senate. With his eye still on a national campaign, politically he tacked to the centre ground. With fellow Republican John McCain, he reached across the aisle in a series of bipartisan initiatives, in particular disability rights.

His colleagues in the Senate remembered his ability to listen in meetings (he still couldn’t take notes) and his air of inscrutability. McCain knew him for a decade before he discovered Dole hard worn a memory bracelet with McCain’s name on it throughout his captivity in Vietnam.