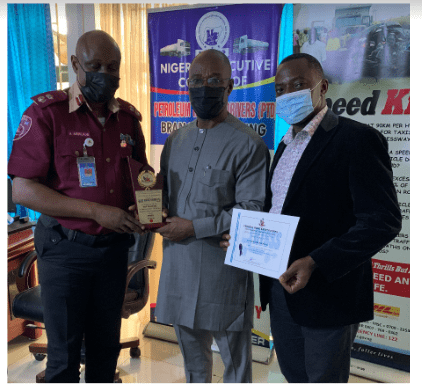 According to the FRSC, Julius Berger won the award for the company’s compliance with the best expectations in applying the stipulated guidelines as stated by the Corps Transport Standardisation Office.

In a letter conveying the Award to the company, the FRSC said that, “the Federal Road Safety Corps as a lead agency in road traffic and safety management through its Road Transport Safety Standardization Scheme (RTSSS) introduced the certification of fleet operators’ drivers as a basic safety requirement for driver’s education and fleet management standardization with a view to minimize their involvement in avoidable Road Traffic Crashes (RTC).”

It added that previous participation of the company in the certification programme has yielded positive result as evident in improvement in the driver’s proficiency and the reduction of RTC involving the company.”

According to the FRSC, following earlier correspondences with Julius Berger, the Corps conducted the certification of drivers and inspection of the company’s vehicles nationwide. “Due to the busy schedule of the drivers, the exercise was decentralized and conducted in different centres including Kaduna, Lagos, Port Harcourt, Uyo, Warri and Onitsha. The Corps ensured that all the drivers were certified with a view to developing their driving competency towards better service delivery…which will no doubt lead to improved productivity,” the FRSC said.

With the objectives of “improving truck driving skills and knowledge of emerging trends in road traffic safety, educating them on new dynamics in driving, evaluating the drivers level of understanding of the Nigerian Highway Code and other traffic related issues and educating the participants on how to manage truck driving related stress,” the programme, according to the FRSC, showed that Julius Berger has really impacted much training on their drivers that there is drastic reduction in recorded road traffic crashes involving the company’s drivers.

The FRSC on an evaluative scale, hailed the improved driving competence and safety orientation and practices of JBN’s fleet drivers.

The Corps Transport Standardisation Officer, Corps Commander Abiodun Akinlade, presented the award to Julius Berger Nigeria Plc in Abuja on behalf of the Corps Marshal of the FRSC

Reacting to the Award, the Head, Media Relations Office of JBN Plc, Prince Moses Duku thanked the FRSC for the significant and encouraging award. Duku said, “…over the years, Julius Berger has seriously committed tremendous amount of resources into improving the professional competence and safety orientation of its hundreds of drivers, and operational teams in general.

Duku further added “…for the good reason of our manifest operational scope and geographical spread, Julius Berger is not relenting in its consistently intentional and proactively self-driven safety mandate. It is also to be noted that in the engineering construction sector and its necessarily huge and routine logistical requirements, fleet management and safe deployment of same is a fundamental necessity for our historically successful overall service delivery.”

“As Julius Berger appreciates the worthy Award of Recognition for Best Practices in the implementation of Nigeria’s Road Transport Safety Standard Scheme by the highly respected road safety regulatory authority, the FRSC, our company, as in all our professional endeavours, commits to an ever-improving road safety profile. On behalf of our MD, the executive management and entire staff, we say thank you for this award to Julius Berger on the merit”, Duku said.

James Agama of the Corporate Communications Department and Trust Ekaji of the HSE Department of Julius Berger were also in the delegation of the company that received the Award at the FRSC Office in Abuja recently.