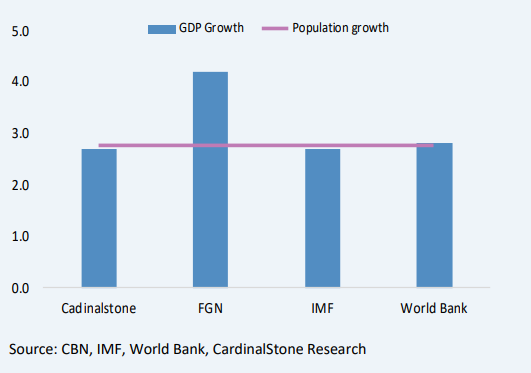 Nigeria’s economic recovery gained momentum in the third quarter of 2021, as the low base in the non-oil sector supported output and secured a growth level of 4.0%.

In particular, positive momentum was seen in sectors like trade and real estate (21.0% of the economy), both of which are on the path to their first yearly growth in 6 years.

The latter may have fed off prolonged periods of low-interest rates, while the former likely benefited from improved cross-country business activities upon border re-opening and less stringent COVID restrictions.

According to the IMF, Nigeria’s wireless telecommunication and IT services industry had an over 30.0% labour productivity and revenue CAGR in the past decade.

This momentum is likely to persist on the growing digital needs of the country’s young and dynamic population.

The rise of mobile money, 5G technology, broadband penetration target of 70.0% by 2025 (vs 45% currently), and NCC’s 5- year Strategic Vision Plan (SVP) to drive digital literacy and service infrastructure are also likely to be supportive going forward.

Total spending for 2022 was estimated at N17.1 trillion, with a recurrent and capital expenditure split of 67.4% and 32.6%, respectively.

“Elsewhere, data suggests an average increase in expenditure of 15.9% in four of the last five pre-election years.”

The government is likely to remain aggressive on growing non-oil revenue, with the budgeted amount estimated at N5.3 trillion (62.0% of the total revenue).

Available breakdowns indicate that 28.4% of non-oil revenue is expected to be raised from taxes. Specifically, VAT, CIT, and customs are billed to contribute N313.6 billion, N909.3 billion, and N834.1 billion, respectively.

However, Nigeria still lagged SSA peers from a growth perspective, with the oil sector shaving off c.1.0% of real GDP growth due to low crude oil production linked to terminal shut-ins and weaker investment.

The long-term structural drivers of growth remain education, electricity and fertility, according to Renaissance capital.

Renaissance capital chief economist Charles Robertson notes that when fertility stays high, savings are in short supply, so there is no investment and a shortfall in jobs.

The constant cry is “Where will the jobs come from?” When fertility falls, savings rise, so investment rises and this creates new jobs.”

“On literacy, Africa has made huge progress over 70 years, such that most countries and all of southern Nigeria now have the human capital to industrialise.”

Nigeria’s population boom is definitely a ticking time bomb. Reducing fertility rates will be positive for growth and income per capita!