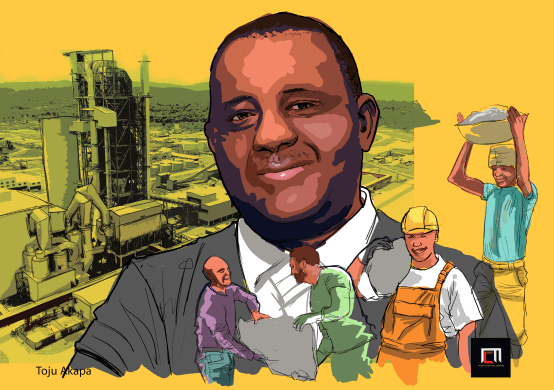 The price cement in Nigeria currently hovering at about N3,500 per bag can fall by some 40 percent to N2,200 if there is an increase in capacity and production, stronger competition, and an opening up of the sector to more players as well as imports, according to Abdul Samad Rabiu, Chairman of BUA Group.

Two of those factors (increased production and competition) are directly under the control of BUA which is working actively to achieve them so prices can begin to fall, Rabiu told MoneyCentral in an interview at his home in Lagos.

“The price of Cement is high in Nigeria simply because we do not have enough supply. That is the simple answer. It’s simply a reflection of economics on the theory of the laws of supply and demand,” Rabiu said

“So, it’s not true if anyone tells you that we are producing enough. You look at the numbers, Nigeria is a country of over 200 million people, Cement production for last year was about 30 million tones. Forget about installed capacity, I am talking about actual production.”

The figures bring the Nigerian consumption average to about 120-130kgs per person, according to MoneyCentral calculations.

While the comparable figures in most other African countries stands at about 170-200kgs per person.

This thus places Nigeria at about the lowest in Africa.

“Nigeria is producing at less than any country in Africa apart from maybe Niger Republic. That then means that we do not have enough capacity,” Rabiu said.

To help address this and thus be able to effectively compete against the dominant player in the sector, BUA cement is pouring money into building new plants across different geographic locations in the country.

Late last year, BUA Cement signed an agreement with Sinoma CBMI of China for the construction of three new cement plants of 3 million metric tons per year (mmtpy) in Edo, Sokoto and Adamawa states of Nigeria, to be completed by the end of 2022.

Upon completion, it will bring BUA Cement’s total capacity to 20 million metric tons by 2022. The 9 million of combined capacity meanwhile, is the single largest contract ever awarded in the Nigerian Cement Industry for the construction of new cement plants at the same time and by a single company, in Nigeria.

“There is no doubt that there is still a huge deficit in supply whilst demand continues to increase in Nigeria. This situation has led to an increase in the retail prices of cement despite ex-factory prices remaining partially unchanged. To bridge this huge deficit gap in Nigeria and in the absence of new major investments in the industry, we have taken this decision to invest and build these new plants at a total project cost of $1.05 billion which will be completed by the end of 2022,” Rabiu said at the signing ceremony held simultaneously at BUA HQ in Lagos and the CBMI HQ in China.

Before the new plants are commissioned however BUA cement has to contend with the fact that it is difficult for it to compete on pricing with a major dominant player controlling 64 percent of market share.

“Recently one of the dominant players increased prices and we tried to resist. We will continue to resist but it is hard when you don’t have the firepower yet in terms of capacity and production on ground to counter such moves,” Rabiu told MoneyCentral.

The country is the largest market for cement in Sub-Saharan Africa and a highly attractive production center, having significant deposits of limestone close to large demand centers like major cities.

Total Nigerian consumption was 21.2 million tons in 2019, with Dangote Cement supplying 13.7 million tons, equivalent to 64.6 percent of the market, leaving the other 2 players (BUA and Lafarge) to share the rest.

The total installed capacity for all three firms is 48.3 million tons, with Dangote Cement alone having 29.3 million metric tons (capacity) in Nigeria, but capacity utilization is often close to 50 percent (for all firms) due to various issues ranging from power supply to the need for annual plant maintenance.

This is the reality that BUA Cement is up against, leaving it with no choice but to invest in new plants to increase production and fight for market share gains, according to Rabiu.

The financing of capacity expansion has not come cheap for BUA.

Total borrowings by BUA Cement jumped by 1,242 percent in just one year, between December 2019 and December 2020, to N287.43 billion, with the average interest rate to be paid to lenders ranging from 4.5 percent (FX loan) to 13.5 percent per annum.

In a rare and candid revelation, BUA Chairman Rabiu, expressed the opinion that Nigerian Cement manufacturers may be too profitable, bringing about the need for more players to be enabled to come into the sector and engender competition.

“We currently have about three major players in the industry and the figures have shown that we are not meeting the market demand,” Rabiu told MoneyCentral.

In other words, Nigeria operations are the cash cow of Dangote Cement and it is extremely profitable with Nigeria Alone profit margins of 45 percent as at year end 2019, compared to 23 percent for the Group as a whole and negative margins for Pan African operations.

Lafarge’s profit margins at year end 2019 was equivalent to 54 percent on revenues of N212.9 billion and net income of N115.1 billion. Lafarge had one-time gains from the disposal of its South African operations in the period.

Nigerian cement firms are however not immune from disruptions happening in the wider macro economy in the form of high energy costs, spiraling inflation, devaluation and unfavorable macroeconomic policies by the Federal Government.

BUA Cement on its part is spending more on input costs to produce each unit of product as an inevitable devaluation of the currency meant production costs ballooned which should put downwards pressure on profit margins this year.

Cement makers in Africa’s largest economy have deployed various energy mixes to save cost and maximize profit and manufacturers have warned that if the government does take urgent steps to solve the power crisis in the country, the industry will plunge into an existential crisis.

Between 2019 and 2018, manufacturers spent N246 billion fueling their generators alone, according to Data from the Manufacturing Association 0f Nigeria (MAN).

BUA Cement is making an effort at cost optimization as it co-configured its Sokoto Plant to run on gas. The plant was running on Low Pour Fuel (LPFO), an expensive source of energy that has been jettisoned by most companies.

“We believe devaluation will exert downward pressure on margins as industry players may be unable to pass on the full cost to consumers in the form of higher prices,” said analysts at Cordros Capital Securities Limited.

Imports to the rescue?

The Chairman of BUA Group, Abdul Samad Rabiu, said some of their cement plants recently stopped collecting advances for cement as they couldn’t meet demand for products.

Bringing cement prices down to about N2,200 per bag which is similar to what other African countries pay for the commodity would entail opening the sector up to more players, according to Rabiu.

“So, to your question as per what needs to be done to bring down the cost of Cement in Nigeria, my position will be that the Federal Government should re-look into some of the existing policies regulating the industry. The policies should be re-looked into to enable more participants to come into the industry,” Rabiu told MoneyCentral.

The Federal Government of Nigeria currently restricts the importation of cement into the country.

In South Africa where Dangote Cement has 2 plants with a production capacity of 2.8 million metric tons, imports have helped to bring down prices to the benefit of consumers.

Dangote Cement in its financial statements said annual sales volume for the firm in South Africa for 2019 decreased by 9.4 percent year on year (y-o-y): “mainly due to low demand and increased competition from importers and blenders.”

Rabiu notes that with the current ban on cement imports into Nigeria, if any of the plants of the three major operators are out of commission for repairs or maintenance, then scarcity usually occurs and cement prices immediately shoot up.

The BUA Chairman agrees that advocating for lower cement prices would affect him personally, but says making money is not his main motivation.Then, pausing with a smile, he adds: “Nigeria has given so much to us and we need to be giving back.”