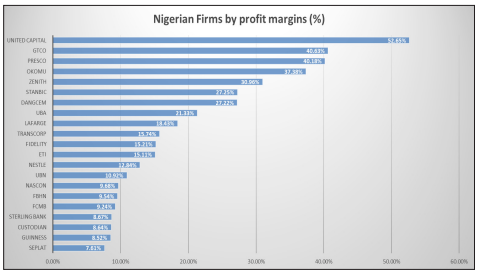 The breakthrough in Covid-19 vaccines and the reopening of the economy that lifted optimism that 2021 was going be a post pandemic year of recovery bolstered the profit margins of the largest companies in Nigeria.

This was even as they were beset by inflationary pressures, currency volatility, unfavourable regulatory environment, and infrastructure bottleneck.

An improvement in profit adds impetus of entities’ ability to pay their shareholders a bumper dividend that could send share price soaring since a steady dividend payment indicates good financial health.

The average net profit margin of 30 most liquid and capitalised companies increased to 16.94 percent in September 2021 from 13.84 percent as at September 2020, according to MoneyCentral calculations.

Combined profit after tax otherwise known as net income spiked by 30.60 percent to N1.50 trillion in September 2021 from N1.15 trillion the previous year.

Their cumulative revenue followed the same growth trajectory as it grew by 18.63 percent to N8.67 trillion in the period under review from N7.30 trillion the previous year.

Analysts say the market has been selling off shares of companies beset by declining margins in response to disappointing results during the earnings season.

“It is right to say that companies with strong profit margins expansion and improved profitability are gaining investor attention, hence the liquidity in their stocks,” said a market participant who doesn’t want his name mentioned.

“Expectedly, shares of such firms will continue to trade actively, with some prospect for positive returns as investors see value in them, given profit margin expansions and attendant value creation to shareholders,” said the analyst.

Of course, the relaxation of the lockdown policy earlier in the year paved the way for companies to pass on rising input cost to consumers, but there are concerns that there is a limit to squeezing consumers who are already reeling with high utility bills and spiraling transportation costs in countries where unemployment rate has skyrocketed.

According to the National Bureau of Statistics, the Nigerian economy grew by 4.03 percent year on year (yoy) in real terms. This was lower than the 5.01 percent yoy growth reported in the second quarter (Q2)-2021, but was a major cross compared to the 3.62 percent contraction in the third quarter (Q3)-2020.

The average net profit margin of the three dominant producers of the building materials: Dangote Cement, BUA Cement, and Lafarge Africa moved to 26.97 percent in September 2021 from 25.74 percent the previous year.

Dangote Cement, the most capitaliased firm in Africa’s largest economy reported gross margin of 61.6 percent, which is at the highest level since second quarter of (Q2) 2015 (65.1 percent).Aside from the relaxation of lockdown measures by the government that accelerated construction activities, the industry also benefited from low interest rate environment that provided sector players the opportunity to reduce borrowing cost.

Combined net income was up 14.41 percent to N764.95 billion, and industry profit was mainly driven by grandiose performance of Access Bank, United Bank for Africa, Fidelity, Sterling Bank, and Ecobank.

However, holistically the majority of banks are inefficient as a ridiculously high cash reserve ratio and the central banks dovish stance have significantly beaten down net interest margins (NIM), while the return on equity has deteriorated, raising concerns about depressed valuations.

The dominant players in the agriculture sector: Okomu Oil Palm and Presco Oil Palm who have seen consistent growth in earnings in the past few quarters on the back of a border closure that fend off competition are star performers on the NGX  30 Index.

It is worthy to note that average net profit margin of the oil palm producers increased to 38.77 percent in September 2021 from 26.04 percent as at September 202o.

The biggest palm-oil producers have been a beneficiary of the government ban on importers accessing foreign exchange for certain products that has been stoking demand for their products.

That is on top of the higher crude palm oil (CPO) and rubber price as competitors in Asia are grappling with weather conditions and ageing palm tree profiles which have impacted fresh fruit bunches (FFB) yields.

Also CPO prices are supported by increased demand for vegetable oils, due to a tighter supply of soft oils such as soya beans and soft oils.

The average net profit margin of the consumer goods industry on the index moved to 4.37 percent in September 2021 from 3.63 percent the previous year.

Interestingly, the telco giant’s margins have been buoyed by data that continue to drive revenue growth, supported by fintech, and digital service.

However, consumer goods firms have the slimmest margins compared to other sectors as rising production costs are growing faster than revenue growth.