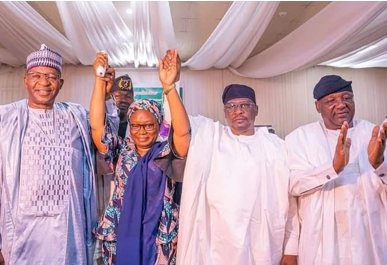 With this development, Fintiri will not be contesting along with the present deputy Governor, Chief Crowther Seth as his running mate in the next year’s elections, a political strategy welcomed by many PDP members.

Speaking at the event, Governor Fintiri described the choice of Farauta as a painstaking strategy for gender sensitivity in addition to her expertise which will add tremendous value to the campaign of the PDP.

The Governor added that Farauta’s competency and loyalty is exceptional, saying she has been tested severally and proven to be dependable and worthy, and therefore called on members of the opposition political parties to join the winning team for the overall interest of Adamawa.

While acknowledging the loyalty and steadfastness of deputy Governor Chief Crowther Seth, Governor Fintiri commended him for his sacrifice and gentility, promising to complete the first tenure with him.

He recalled how he met Adamawa in a state of darkness, deficiencies, incessant conflicts and dearth of infrastructure among others when he came on board as Governor but his administration was able to change the narratives for the better.

The Adamawa state chairman of PDP, Barrister Tahir Shehu saluted the courage of the deputy Governor, Chief Crowther Seth for endorsing Farauta for the next year’s elections, calling on party members to rally round the deputy governorship candidate.

Pro-chancellor and chairman governing council of ADSU who doubles as member of the PDP board of trustees, Alhaji Auwal Tukur described the choice of Farauta as wise, going by her pedigree in the academia.

To reciprocate the gesture, the deputy governorship candidate, Professor Kaletapwa Farauta, appreciated Governor Fintiri and the PDP for her choice, calling on people especially women who did not collect their voter’s card to do so in earnest.

The unavailing was attended by former and present federal and state lawmakers, members of the state executive council, PDP top leaders and supporters, top government functionaries and friends of Professor Kaletapwa Farauta.