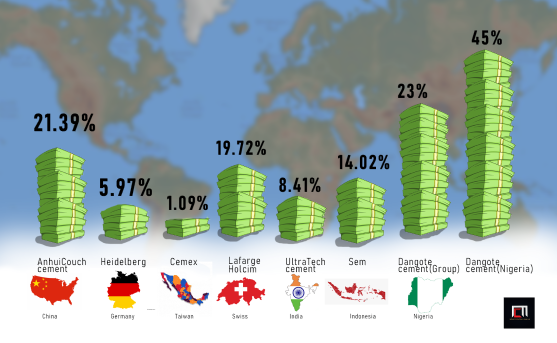 Cement manufacturers in Nigeria are an anomaly with regards to profitability, compared to most other established global producers of the centuries old building material, amid an outcry in the country over surging cement prices.

MoneyCentral analysed the financial statements of the 3 major cement manufacturers in Nigeria, Dangote Cement, Lafarge Africa and BUA cement, who together control 100 percent of the market, and compared it that of 7 other major global cement producers.

The data shows that the Nigerian cement firms have the highest profit margins in the world.

Ordinarily this would have been a good financial metric to get excited about but with the optics of ever rising cement prices in Nigeria, juxtaposed against producers with outsized profits, it can be rightly seen as a problem that needs addressing.

Profit margin is a measure of profitability calculated by finding the net profit at any given period as a percentage of the revenue.

In finance profit margin is important because it shows how much of every naira of revenue is flowing to the bottom line.

Nigerian cement manufacturers retain quite a huge chunk of their revenues as profits defying the trend seen in most other parts of the globe and in Africa itself.

Cement producers are generally high volume, low margins producers because of a number of reasons including the high energy costs of running cement plants, carbon emission taxes, and the commoditized nature of the product which is produced with often little innovation.

The firm has integrated factories in seven countries, a clinker grinding plant in Cameroon and import and distribution facilities for bulk cement in Ghana and Sierra Leone. Together, these operations make it the largest cement producer in Sub-Saharan Africa.

In other words, Nigeria operations are the cash cow of Dangote cement and it is extremely profitable with Nigeria Alone profit margins of 45 percent as at year end 2019, compared to 23 percent for the Group as a whole and negative margins for Pan African operations.

Lafarge’s profit margins as at year end 2019 was equivalent to 54 percent on revenues of N212.9 billion and net income of N115.1 billion. Lafarge had onetime gains from the disposal of its South African operations in the period.

MoneyCentral looked at the top cement manufacturers globally that have publicly available financial statements, analysed those statements and calculated the respective profit margins of the cement makers to compare against Nigerian peers (See table below).

The data shows that Nigerian cement manufacturers enjoy the highest profit margins in the world.

Dangote Cement for instance which controls 64 percent of the Nigerian market is the lowest cement producer profiled among the group in terms of volume (14.1 million tons produced in Nigeria in 2019) but has the highest profit margins.

There is a feeling in Nigeria that the concentration among the top three cement producers, who together dominate the entire market, combined with practically impossible barriers erected for new entrants are responsible for ever rising cement prices.

Profit margin, which is the ratio of profits to sales, is a key financial target for most firms. Companies often use their pricing strategy to generate their target profit margins.

Firms can then set prices to achieve these target margins, while remaining somewhat competitive in the market. However, if a company wants to compete on price alone, it must have a low enough cost structure and achieve sufficient sales volume to generate profits.

So the question will be, is there really something unique about Nigeria’s cement market or is something else going on?

Dangote Cement’s experience in its pan Africa operations shows that there may be some truth to allegations of excessive high pricing by the 3 Nigerian cement makers.

In South Africa where Dangote Cement’s sales numbers cannot be published due to local competition laws, annual sales volume for the firm in 2019 decreased by 9.4 percent year on year (y-o-y): “mainly due to low demand and increased competition from importers and blenders,” according to statements it made in its financials.

Critics claim that Nigerian cement manufacturers have added very little value to the economy over the years with their industry protected by Government and as such they are doing more harm than good to the Nigerian economy.

“Nigeria’s cement policy has been a complete failure,” said Feyi Fawehinmi, accountant, writer and social media influencer based in the U.K., and a strident critic of Nigerian governments cement policy.

“If you are going to have a policy supporting the production of an input (cement), the only sensible way to measure the success of that policy is to measure the things that input goes into (housing).”

Fawehinmi contends that Nigerian cement producers have not added any local innovation or research and development, to improve the body of cement knowledge that has been in existence for 2,000 years and hence should not be setting prices so high.

“All the technology used to manufacture cement in Nigeria is simply imported from China,” Fawehinmi said.

At MoneyCentral we would not quite go as far as to suggest little value addition by Nigerian cement firms.

Dangote Cement for instance supports many businesses that participate in the supply chain and help them thrive and build their own businesses.

The number of retailers and distributors in Dangote cement’s Nigerian distribution chain grew year-on-year, from 7,000 to 10,000, and from 568 to 685, respectively, representing a percentage growth of 43 percent and 21 percent for each category.

We also believe listing of the cement businesses by their owners (Dangote and BUA) make financial and corporate disclosures more transparent.

BUA Cement for its part is investing to increase its capacity by an additional 9 million metric tonnes per annum. The new capacity addition should take BUA to about 17 Million tonnes Per Annum in the Nigerian market. New addition of capacity should in theory bring prices down in a truly competitive market.

Nigerian cement manufacturers have also largely built their plants all in the past decade or so, helping them to tiptoe around legacy emissions issues being faced by older cement companies in the West.

“DCP plants have all been built in the last twelve years. They have been designed to be intrinsically efficient through the adoption of cutting edge technology in cement production,” Dangote Cement said in its 2019 financial statement.

The firms are also not immune from disruptions happening in the wider macro economy. Land exports for Dangote cement for instance reduced to 0.45Mt from 0.7Mt for the full year owing to the border closure in the last few months of 2019.

What can be done?

The Nigerian government evidently worried about high cement prices recently reached an agreement with cement manufacturers to charge discounted prices as part of its plan to construct 300,000 houses for low-income Nigerians, under the Economic Sustainability Plan (ESP).

The price of cement late last year touched a high of N4,100 per bag, a development that the government blamed on the #End SARs protests.

In Lagos at the time of filing this piece the price of cement hovers between N3,200 – N3,500 per bag, depending on the brand.

MoneyCentral’s enquiries from Ghana shows that the retail price of a bag of Dangote cement is 39.5 Ghana cedis, roughly $6.50 or N3,000, making it less expensive in Ghana than in Nigeria even though the market is supplied from Nigerian factories.

The solution to the problem inherently lies with cement pricing in Nigeria and how it is arrived at by manufacturers, middle-men and retailers.

The usual refrain likely to be heard about high cost of energy, poor road and transport infrastructure, high cost of capital and other costs hindering cement manufacturers, would only apply to any potential new entrants and not current cement manufacturers who have attained dominant position in the market, as can be seen by their ability to generate world beating profit margins.

In other words, even after taking into consideration total manufacturing costs of N379.9 billion (including fuel and power, salaries, plant maintenance and raw materials) incurred by Dangote Cement in 2019, the firm still managed to remain one of the most profitable cement firms in the world based on its pricing power.

To truly get cement prices to trend lower the Federal Government then needs to enforce competition in the sector.

That would entail an improvement in the anti-trust or competition laws of Nigeria, to enthrone true competition in the nations’ cement sector.

New entrants must also be encouraged with tax breaks while a cap or moratorium should be placed on tax breaks given to dominant and established cement names.

Finally, the Federal Government should consider removing barriers to importation of cement into Nigeria. As can be seen from the South African example, imports did help to bring prices down to the benefit of consumers.