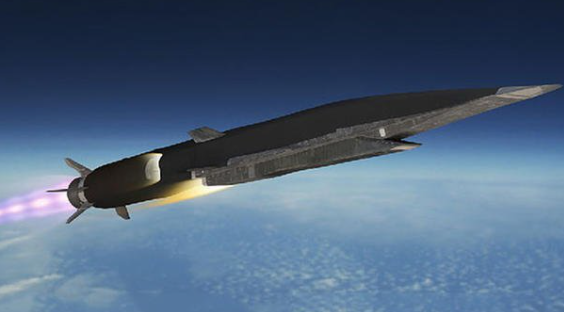 Russia said on Saturday that it had used hypersonic Kinzhal (Dagger) missiles to destroy a large weapons depot in Ukraine’s western Ivano-Frankivsk region.

Russia’s Interfax news agency said it was the first time Russia had deployed the hypersonic Kinzhal system since it sent its troops into Ukraine on February 24.

Defense ministry spokesman Igor Konashenkov told a briefing that the underground depot hit by the Kinzhal system on Friday housed Ukrainian missiles and aircraft ammunition, according to a recording of the briefing shared by Russian news agencies.

Russia prides itself on its advanced weaponry, and President Vladimir Putin said in December that Russia was the global leader in hypersonic missiles, whose speed, maneuverability and altitude make them difficult to track and intercept.

Hypersonic weapons such as Russia’s 3M22 Zircon fly so fast and low — at speeds of up to Mach 6 and at a low atmospheric-ballistic trajectory — that they can penetrate traditional anti-missile defense systems.

The missile flies with an advanced fuel that the Russians say gives it a range of up to 1,000 kilometers. And it’s so fast that the air pressure in front of the weapon forms a plasma cloud as it moves, absorbing radio waves and making it practically invisible to active radar systems.

U.S. Aegis missile interceptor systems require 8-10 seconds of reaction time to intercept incoming attacks. In those 8-10 seconds, the Russian Zircon missiles will already have traveled 20 kilometers, and the interceptor missiles do not fly fast enough to catch up.

According to Popular Mechanics, even if a U.S. ship were to detect a Zircon missile from 100 miles away, it would have only one minute to do something about it.

In order to intercept a Russian Zircon missile, the U.S. would either need to intercept it at launch or fly an object into its path.

Russia’s shift to hypersonic weapons is likely a means of contending with American superiority in size, technology and sheer number of aircraft carriers. The U.S. Navy intends to maintain a force of 12 nuclear-powered aircraft carriers.

By contrast, Russia has one — and it deploys with a tugboat in case its engine breaks down.

While at sea, any of Russia’s 15 Buyan–class corvettes will be able to carry up to 25 Zircon hypersonic missiles. It would take fewer than a half-dozen of those missiles to sink even the most advanced American aircraft carrier, such as the USS Gerald R. Ford.

The Kinzhal missiles are part of an array of weapons unveiled in 2018.

Ukraine’s defense ministry said late on Friday it lost access to the Sea of Azov “temporarily” as invading Russian forces were tightening their grip around the Sea’s major port of Mariupol on the 23rd day of the invasion.

“The occupiers have partially succeeded in the Donetsk operational district, temporarily depriving Ukraine of access to the Sea of Azov,” Ukraine’s defense ministry said in a statement.

Separately, Ukraine’s military said the plant was struck by cruise missiles launched from the direction of the Black Sea.

The type of the missile was likely Kh-555, the military said, which are launched from heavy strategic bombers. Similar missiles struck the Yavoriv military base in western Ukraine on Sunday.

The city of Voznesensk was also hit by a Russian airstrike Friday morning, according to the city’s Mayor Evgeny Velichko on Facebook, as reported by the New Voice of Ukraine.

According to Starukh, two bombs were dropped from a plane, only one of which exploded. There are no victims, but the exact damage caused by this attack is not yet determined, Interfax reported.

One person was killed and 4 wounded after parts of a Russian missile fell on a residential building in the northern part of the Ukrainian capital Kyiv on Friday morning, emergencies services said.

The services said in a statement that 12 people were rescued and 98 were evacuated from the 5-story building.

The Ukrainian emergency services said that one person was killed and 11 injured when Russian forces shelled a multi-story teaching building on Kharkiv Friday.

According to the Donetsk region’s governor, Russian shelling in the city of Kramatorsk on Friday killed two and injured six.

Later in the day, Ukrainian air defenses managed to shoot down a Russian cruise missile in the Odessa region, the military said in a statement on Facebook and cited by Interfax.

Russia has established a no-fly zone over Ukraine’s Donbas region, according to a separatist official from the Donetsk People’s Republic, the Interfax news agency said on Friday.