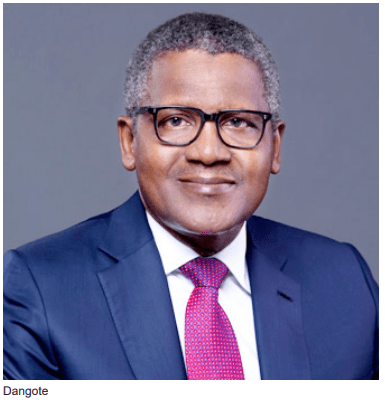 President of Dangote Group, Aliko Dangote, has emerged as the 73rd richest person in the world with an estimated net worth of $20 billion, as against his previous ranking of 83rd in the world last month, according to Bloomberg’s billionaires’ index.

Dangote, who remains the richest man in Africa for the 11th year running, was the only African who made the top 100 list of the world’s 500 richest people. The Nigerian billionaire’s wealth rose following a year-to-date price increase in the shares of Dangote Cement Plc.

According to Bloomberg, the Nigerian billionaire started 2022 on an upward note after being ranked the 97th richest person in the world in January, with a net worth of $19.2 billion.

In February, the Nigerian billionaire moved up the ranking to become the 83rd richest person in the world, vaulting over popular Russian businessman and owner of Chelsea Football Club Roman Abramovich, who is now ranked 132nd on the list of the world’s 500 richest people.

South Africa’s richest man Johann Rupert came a distant second at 213th position, having lost over $1 billion since the Ukraine-Russia conflict began. Due to the market jitters, shares in luxury goods markets have fallen drastically, with the latest figures estimating Rupert’s net worth at $9.8 billion, from $11.93 billion at the start of business in 2022.

Nicky Oppenheimer came third with an $8.75 billion valuation and 246th ranking globally, while Natie Kirsh, in 272nd position, was the fourth African on the list. He is worth $8.24 billion