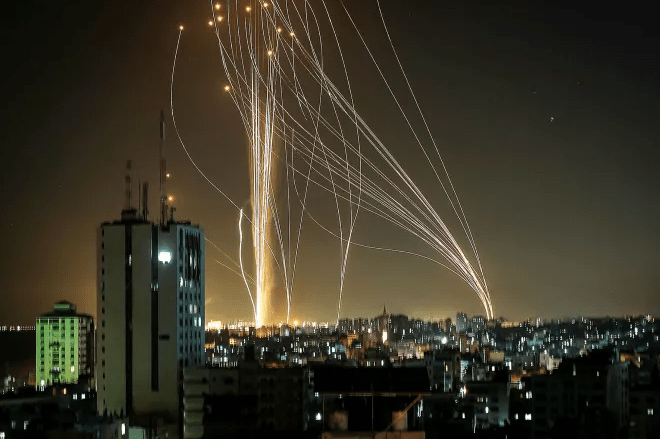 Israel has killed at least 20 Hamas and Palestinian Islamic Jihad militants, according to the Israel Defense Forces. With Israel carrying out complex manoeuvres, it warned that civilian casualties were likely.

“Some of the [rocket] firing pits are embedded within the civilian population and it cannot be ruled out that there will be civilian casualties,” it said.

The operation injured hundreds of Muslim protesters after police fired tear gas, stun grenades and rubber bullets. Jen Psaki, White House spokesperson, said President Joe Biden, had been receiving updates from his national security team and that his primary focus was on de-escalation.

Hamas and Israel kept up a deadly barrage of rocket launches and air strikes on Tuesday night with a UN envoy warning that the conflict risked spiralling into “all-out war”.

Tel Aviv was targeted at least four times and explosions were heard all around central Israel, as the country’s Iron Dome defence shield fired volleys of interceptor missiles.

At least five people had been killed in Israel, medics said.

In Gaza, at least 35 people died, including 10 children, and more than 200 were injured, according to the territory’s health ministry.

A doctor at Shifa Hospital said they were overrun by wounded. “Many more will die tonight,” he said. Tor Wennesland, the UN Special Co-ordinator for the Middle East Peace Process, warned that the aerial hostilities were “escalating towards an all-out war”.

Widespread unrest broke out among Arab populations in Israeli cities, and Israel moved a police battalion from the occupied West Bank to buttress local forces.

The offensive began when Hamas fired rockets on Monday evening towards Jerusalem, where hundreds of Palestinian protesters had been injured by Israeli police at al-Aqsa mosque, Islam’s third holiest shrine. The three days of stand-offs coincided with Ramadan.

But the intensity of the counter-strikes rose dramatically after Benjamin Netanyahu, Israeli prime minister, ordered an expansion of the country’s air campaign in the Gaza Strip on Tuesday. Israel completed dozens of bombing runs targeting rocket launching pads and military commanders.

“Hamas will receive blows here that it did not expect,” he said.

Hamas responded with its first volley of rockets towards Tel Aviv. It said it launched as many as 130 rockets simultaneously in a possible attempt to overwhelm the Israeli air defences.

Benny Gantz, Israeli defence minister, who has ordered 5,000 reserve troops back to duty, said that Israel’s air campaign would continue until “its operational goals are met”.

Israel has fought three all-out wars with Hamas, the militant group that took control of the Gaza Strip in 2007. But the two foes have also engaged in multiple bouts of hostilities that have stopped short of war, with mediators such as Egypt and Qatar hammering out truces.