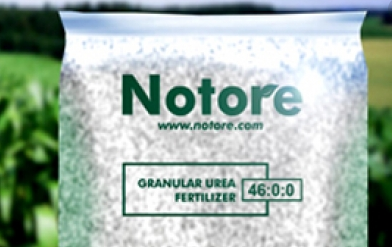 Notore Chemical a maker of Urea and NPK returned to profit in the first quarter (Q1) of 2022 as Nigeria Fertilizer exports surged.

Overall reported revenues surged by 211% to N16.38 billion in Q1 2022, helped by an increase in sales of Urea and other chemicals.

This led to a profit of N1.55 billion from a loss position in the previous period.

Risks however remain for Notore Chemicals in the form of N127.26 billion in outstanding borrowings and N33.259 billion in accumulated losses.

In the first quarter of 2021, the CEO and board of directors were optimistic a turn around maintenance that was expected to deliver 500,000 tons of fertilizer would improve operating efficiency and underpin profitability.

“Achieving this level of production output will not only lead to significant increases in the company’s cash flows from operations, but also substantial increases in revenues annually,” said Ohis Ohiwerei the Group Managing Director and Chief Executive Officer of Notore Chemical Industries.

Notore believes that the domestic fertilizer market is yet to reach its full potential. Furthermore, the demand for urea and compound fertilizers, such as NPK, from the West African markets and neighboring countries bordering the northern part of the country is also quite significant.

Notore is also benefitting from higher prices as the fertilizer industry is experiencing supply-side constraints while demand is rising.

Another major producer, the Dangote Group is also ramping up Nigeria Fertilizer exports from its new fertilizer plant at the Lekki Free Zone in Lagos, to the US, Argentina and Brazil.

Initial shipment from one of the world’s biggest fertilizer plant, which has the capacity to produce 3 million tons of urea and ammonia per year, began in late June 2021.