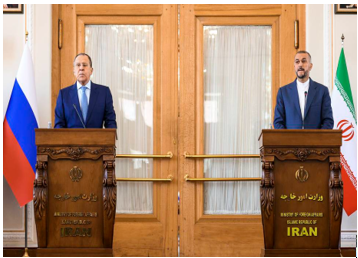 Russian Foreign Minister Sergey Lavrov visited Tehran, where the two parties discussed prospects for bolstering their partnership amid the Western sanctions against Russia and Iran.

The difficult question about the virtually frozen negotiations on the Iranian nuke deal was also raised, and Moscow and Tehran were also unanimous in their opinion on blaming the United States for the current turbulence and for all regional conflicts from Ukraine to the Middle East.

Tehran, which has been under sanctions for more than 40 years, understands the new realities, which its Russian partners have to adapt to more than anywhere else.

Iran’s top diplomat promised during a press conference following his talks with Lavrov that Russia and Iran would take joint action to neutralize Western sanctions.

The countries discussed the prospects for developing economic cooperation between Moscow and Tehran, as well as regional partnerships.

For instance, within the framework of the Eurasian Economic Union, a free trade agreement is in the works, and the Shanghai Cooperation Organization is also a group, which Iran plans to join. According to Lavrov, this process “should not take too long”.

“Despite being under sanctions, Iran has managed to develop a number of industries, ensure its food security, and has not steered away from its foreign and domestic political priorities.

That is, having more modest resources than Russia, it managed to withstand serious sanctions,” Director of Programs at the Russian International Affairs Council Ivan Timofeev said.

“But the main lesson to be learned from the Iranian experience is that all agreements to lift or ease sanctions are unsustainable,” the expert added.