Sterling Bank CEO, Breaks Down How Regulators are Missing the Point on Jobs 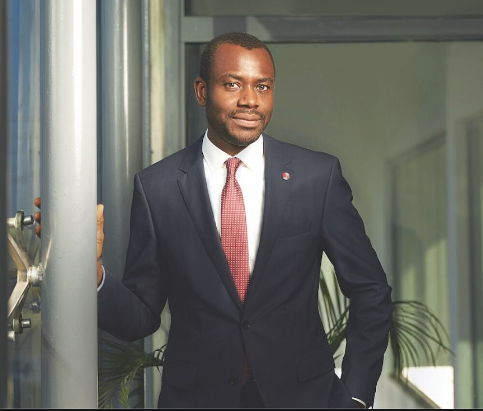 Abubakar Suleiman, the Chief Executive Officer (CEO) of Sterling Bank Plc, has broken down in a series of tweets, how Nigerian regulators are missing the point on job creation.

According to Suleiman, what the private sector owes Nigeria is gainful employment and its contribution should be the efficient allocation of resources primarily to create wealth for all stakeholders.

“Sadly some in government assume otherwise, preferring to harvest newly committed capital rather than let it grow,” Suleiman added.

Regulators need to let entrepreneur’s do their magic, said Suleiman, adding that when Government taxes and spends money that would have been utilized to create jobs, it is no different from a farmer eating his seedlings, and the regulators end up sowing poverty.

“If we taxed & spent all the equity invested in private enterprises, it won’t dent poverty.”
Nigerians don’t want handouts, they want jobs and unless the government is taxing to enable the creation of a competitive environment for job creations, then there is no point, according to Suleiman.

“We know the economy depends on enterprises to grow yet some show a disdain for those who take risks to build companies. Our world of multiple super powerful regulators with no obligation to deliver business growth is akin to featuring 22 referees & 1 player. We are regulating ourselves out of play. Our professed love for SMEs is just for show. SMEs have no future without big corporations.”

“It is time we start thinking of entrepreneurs as partners rather than school kids.”

We hope the right regulators are listening to the words of wisdom from a true jobs creator like Suleiman, as they unveil numerous programs to assist SMEs. See more of the CEOs Tweets below: 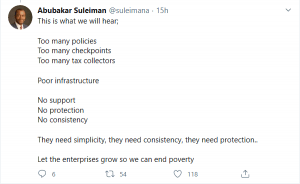