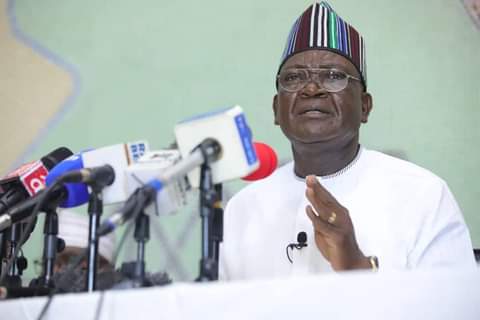 Benue State Governor Samuel Ortom has highlighted some of his modest achievements, in the face of daunting economic and security challenges.

In a media briefing to mark this year’s Democracy Day and his mid term as re-elected Governor, Ortom reaffirmed his commitment to selfless service to the people of the state in spite of challenges.

“In spite of our challenges especially insecurity instigated by Fulani herdsmen invasion, we have recorded numerous achievements in Security, Agriculture, Education, Health, Infrastructure and several other sectors,” the Governor said.

Hear him: “When we took the oath of office for our second term on May 29, 2019, I did promise the people of our dear state that they had spoken loudly with their votes and the entire country heard that my people love me.

“I also did pledge that it was now my turn to reciprocate the love. For that reason, I have willingly opposed any aggression directed at my people and our fertile land. Similarly, our administration has risen to the occasion to frontally address the challenges of governance and to bring development to our people in different sectors of the economy.”

The Governor noted that “Benue State has faced devastating security challenges and inadequacy of funds which have adversely affected our efforts towards development. COVID-19 pandemic and the fiscal constraints that prompted the 2020 downward budget revision are still very much with us.”

Ortom also paid glowing tribute to “the Honourable Speaker and members of the Benue State House of Assembly for the support and cordial working relationship we have enjoyed in the last two years.

“We would not have been able to achieve the things we have accomplished for the good of our state without the cooperation of the State House of Assembly. I equally appreciate His Lordship, the Chief Judge of Benue State, the President Customary Court of Appeal and the entire judiciary in the state for their professionalism and support in ensuring that we serve our people better.

“I also appreciate all members of our great party the Peoples Democratic Party (PDP) and other stakeholders for the maximum cooperation we have received in the last two years.”

He reiterated that he “promised to be Governor of the rich and poor, rural and urban dwellers, men and women, students and workers, market women and traders, young and old, friends as well as opponents.

“I am also the Governor of all ethnic groups who live in Benue State. We have kept our pledge to work hard with the fear of God, to ensure the safety, security and welfare of our people, irrespective of their political, ethnic and religious affiliations.”

The Governor is optimistic that before his exit, “God in his infinite mercy will help” him to “clear all arrears. And one of the things I’ve initiated is the issue of domesticating PENCOM law. There is a window with PENCOM.

On Anti-Open grazing law, the Governor is insisting that the law will not be repealed. Rather, he said the law will be amended to provide stiffer sanctions for offenders.

“The law (Anti-Open grazing law) is legitimate to provide a win win situation. But these people have a hidden agenda. The anti-open grazing law will not be repealed,” the Governor insisted, adding, that Benue State was not gazetted for grazing routes or reserves.

He denied that he harbours grudges against the President Muhammadu Buhari, save for disagreement on certain policy issues.

“I am a Christian; born again for that matter. And I have no reason to hate anyone. The president is my president. I pray for the president every day in my devotion. When the president was sick, Benue state was the first state that organised prayers for him under my watch.

“We can disagree on policy issues. But I don’t hate the president. My president is Muhammadu Buhari. But the president cannot force me to violate the Constitution which I swore to uphold,” Ortom said on his relationship with the president.

The Governor, who said he is in full support of Local Government autonomy denied ever taking from local government funds.

“I’ve never been against LG Autonomy. Because I am a product of LG Autonomy. It’s my disposition that the national Union of Local Government Employees, national secretariat gave me award. If local government autonomy is what the people want, so be it,” Ortom said.

He gave insight about his successor. Hear him: “I’ve always said that only God ordains a leader. For us we are going to consider candidates that can be sold and two, the one with capacity to deliver. Where we cannot resolve, we will go through the primaries.

“We will allow the will of the people to prevail. I am not going to impose a candidate on the people. With prayers, I believe that the best will emerge that will continue from where I stopped.”

On IDPs, the Governor said “the challenge is overwhelming. However, we have been managing. And we will continue to call on spirited individuals and other bodies to come to the help of IDPs.

“We are really in a humanitarian crisis. The promise the federal government made has not redeem it. The help is more in other parts of the country than Benue. We call on our people here, no matter what you have even if little, these IDPs.” He appealed.