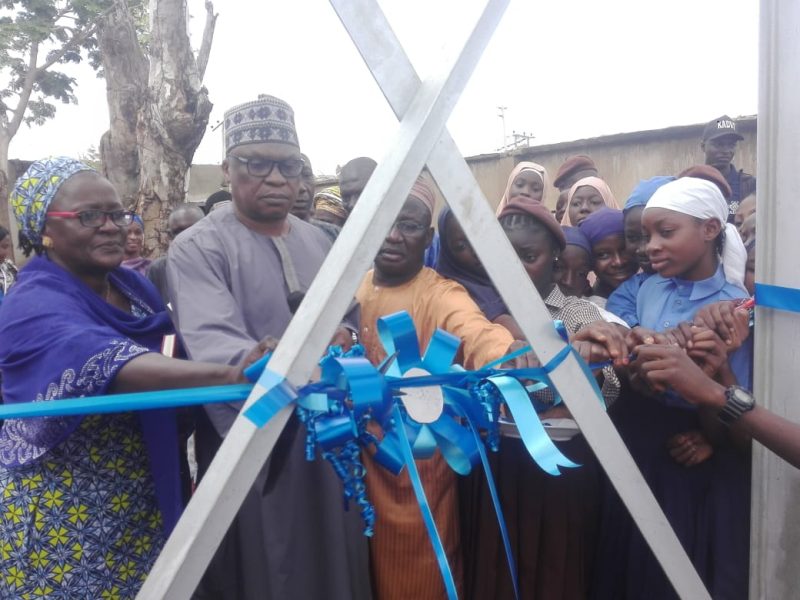 The Kaduna State government has applauded Arewa Metal Containers Limited, ARMECO for the construction of a borehole worth ten million naira in one of the government secondary schools in the state.

Speaking at the commissioning ceremony of the project at Government Girls’ Secondary School, GGSS Kakuri, Kaduna, the Commissioner for Education, Halima Lawal said, the availability of water in any learning environment improves hygiene and healthy living.

The Commissioner who was represented by the Deputy Director Public Schools, Mrs. Baita Mercy Kude, further explained that ARMECO has done well in complementing governments’ effort in the provision of social amenities.

Halima appreciated the company for extending such a gesture particularly in a girls’ school environment where they will be needing water to keep themselves neat and the environment as well.

“When the girl child is experiencing her monthly flow and there is no water to clean herself, she tends to feel uncomfortable within her learning facility, but now that water is available, she will do the needful and automatically, she becomes more comfortable with the environment, which makes learning convenient for her.”

The Commissioner called on other companies to emulate ARMECO by extending such gestures to their host communities.

She also called on the school authority to make judicious use of the water facility through frequent maintenance, adding that water sustains life.

The Managing Director, ARMECO, Engineer Joachim Daudu said the borehole was part of the company’s corporate social responsibility extended to host communities which they were happy to discharge.

According to Engr. Joachim, who was represented by the Developing Business Manager, Alhaji Umar Bagudu, said water is a necessity of life which they were glad to have provided, saying its provision will have an impact on the students’ lives.

The Principal, GGSS Kakuri, Malam Abdussalam Adamu Abubakar who expressed gratitude to the host said, the students had prior to the provision of the borehole suffered many challenges due to lack of potable water.

“There has never been pure water in our school, our students used sachet water, but with this gigantic project, even the spread of infection will reduce because the conveniences will be kept very clean,” he disclosed.

“We have had other corporate organisations like Peugeot Automobile of Nigeria, PAN that has donated furniture to us and now ARMECO. We are indeed grateful and we pray that other organisations will emulate them.”