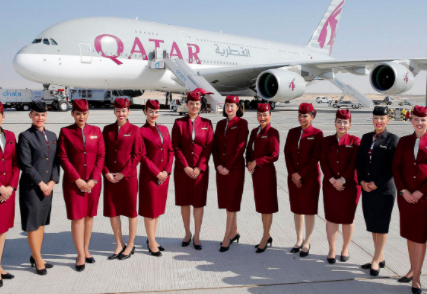 The relationship between Nigeria and Qatar has been strengthened as Qatar Airways made its debut flight in Kano State.

The launch marked the beginning of four-weekly services to Kano from Doha, the Qatari capital, through Abuja, operating on Mondays, Wednesdays, Fridays and Sundays.

The Airways’ state-of-the-art aircraft Boeing 787 Dreamliner touched down at the new terminal of Mallam Aminu Kano International Airport to a water-cannon salute at 11:16 a.m. Nigerian time. The aircraft has 22 seats in Business Class and 232 in Economy, it was learnt.

The inaugural flight was piloted by the Qatari Captain, Mohammed Abdulla, and Nigerian first officer, Mrs Adeola Olamide Ogunmola, from Gwagwalada, as a symbol of the close ties between the two countries.

Qatar Airways also began operating three-weekly flights to Port Harcourt last week. This will bring the number of services it operates between Africa and Doha to 188 weekly flights, serving 28 destinations across the African Continent.

On the incentives, Qatar Airways said it will apply a “flexible booking policy” that offers unlimited changes to travel dates and destinations as well as fee-free refunds for all tickets issued for travel completed by May 31.

Nigeria’s Ambassador to Qatar Yakubu Abdullahi Ahmed said he was happy that Qatar heeded to his request by expanding its airways to Kano, which is one of the most populous states in Nigeria and the commercial nerve centre of Northern Nigeria.

“This will give me more opportunities for interaction and in carrying out my diplomatic assignment in Qatar,” he added.

Emir of Kano, Aminu Ado Bayero said the launch of the Kano-Doha air services was a trace to history, as he recalled that the first aircraft into Nigeria landed in the Kano airport which was built in 1922, became operational in 1936 and was inaugurated in 1942.

The Emir said Qatar Airways will connect the country, through Kano, to the outside world and boost economic investment.