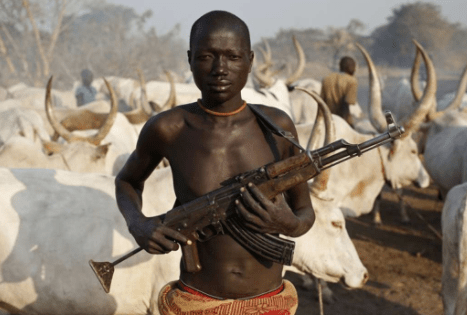 No fewer than ten persons have been reportedly killed in Saturday’s attack on Gidan Sule by suspected Fulani herdsmen in Kadarko, Keana local Government Area of Nasarawa state. It was gathered that an unspecified number of AK 47 wielding gunmen suspected to be Fulani herders invaded Gidan Sule village in the early hours on Saturday shooting any person at sight.

Checks revealed that at the end of the sporadic gun shots, five persons were killed and scores of others escaped with bullet wounds, while several others reportedly missing as survivors scampered for safety.

Besides, two persons earlier reported missing were found dead at a nearby bush on Sunday (yesterday) morning, while several others including children, women and aged persons have not been seen as at the time of filing this report. Confirming the incident, President, Tiv Development Association (TIDA), Comrade Peter Ahemba said that after five corpses were recovered yesterday (Sunday), more than ten corpses were recovered from the bush.

Comrade Ahemba who decried the incessant unprovoked attacks on his kinsmen in recent time recalled how gunmen killed three people at Antsa village in Kwara, Keana local government Area of the state some weeks ago. He bemoaned the killing despite the drafting of security personnel at the Antsa and Dooka to prevent further attacks, and wondered why such attacks were carried out unabated after the measures taken by the state government.

The TIDA president said, ” after the Saturday attack on Tiv community of Sule village where three people were reportedly killed by Fulani herders it is confirmed this morning that more than 10 corpses have been recovered from the bush and still counting as more dead bodies are yet to be discovered,” said Ahemba.

A survivor of the attacks who craved anonymity said:

“Five corpses were recovered yesterday and two persons are still missing as of yesterday. This morning the two missing persons have been found dead bringing the casualty figure to seven and one person still missing,” the source told our Correspondent.

Efforts to obtain comment from the Police Public Relations Officer (PPRO), Nasarawa state police command, Ramhan Nansel, a Deputy Superintendent of Police (DSP), was unsuccessful as calls placed through to his mobile phone failed to connect, just as a text message sent to his phone was not replied at the time of the report.

Less than 48hours after the attack by suspected herdsmen that left scores of people dead in Gidan Sule, a Tiv settlement area in Kadarko, Keana Local Government Area of Nasarawa state, the herders have allegedly turned the deserted villages and farm crops belonging to the deserted farmers into grazing field.

It was gathered that the herdsmen, who were said to have mobilised hundreds of their cattle within and outside the affected Local Government to carry out the act of mischief on farm crops deserted by the Tiv farmers have defied earlier warning by security operatives for the herders to halt hostilities.

Speaking in an interview with our Correspondent, one of the locals, Mr. Iorzua Tyodugh, who escaped narrowly from the Saturday attack, lamented that his cassava and guinea farms both measuring over five hectares have been destroyed by the herders.

“The herders now graze freely on our farm crops at both day and night. They have mobilised their herds from within and outside Keana Local Government.”

“Our hope of going back eventually to harvest our crops, which is our only means of survival, has been dashed. Even if we return home eventually, we will have nothing to feed our families and take care of other needs.”

Reacting to the development, President, Tiv Development Association (TIDA) in Nasarawa state, Comrade Peter Ahemba, who described the situation as unfortunate, regretted that, the herdsmen, having murdered about ten of his kinsmen have now resorted to destroying farm crops that would have been used by the survivors to feed.

“The herdsmen have already killed scores of my people with the use of AK-47. Many others may die as a result of hunger with the way the herders are having a field day committing these atrocities.”

Comrade Ahemba commended the efforts of the state government and the security agencies so far made to arrest the ugly situation and called for more decisive measures to ensure the restoration of peace in the affected areas to enable the displaced persons return to their homes.

Some of the IDPs, who spoke with our Correspondent in Kadarko and Giza camps, decried lack of food and shelter and appealed to the government and spirited individuals to come to their aid.

“Though our leader, the TIDA President, Comrade Peter Ahemba visited us yesterday (Sunday) to sympathize with us and assured us of the government’s prompt intervention, no government official has come to see us yet.”