Why We Embarked on Warning Strike in Kaduna – NLC President 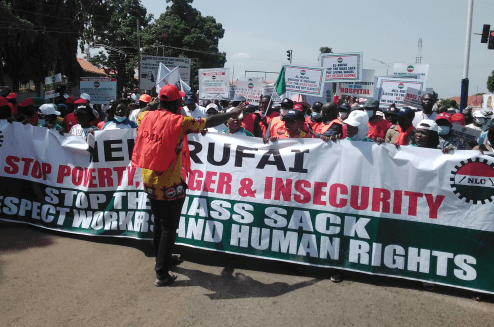 The sacking of over 30, 000 workers which were recently disengaged through competency tests by the Kaduna state government and thousands of them yet to receive their benefits ,are some of the reasons for the ongoing warning strike by the Nigerian Labour Congress (NLC) in the state, as disclosed by the NLC President, Comrade Ayuba Waba.

Expressing displeasure, in what he described as anti-workers’ policy of Gov. Nasir El-rufai’s led government, Waba vowed to resist any form of attempt by the Kaduna state government to intimidate and harass  workers to contract out of the union.

While speaking, the NLC President disclosed that over 11, 000 civil servants were currently penciled for disengagement and conversion to casual and contract workers, adding that workforce reduction is a gross violation of workers and extant provisions of labour law.

Waba said, contrary to El-rufai’s claims of implementing the thirty thousand minimum wage, in the state, that Kaduna government only paid the minimum wage for a month and since reversed to the eighteen thousand, while also disclosing that 20, 000 workers are yet to be paid for the month of April.

According to him, parts of the reason for embarking on the strike is the non-issuance of permanent and pensionable appointments to the newly recruited teachers and non-remittance of statutory check off dues to trade unions.

“It is only in Kaduna state in the whole of the federation that does not respect the labour law. The situation in Kaduna state cannot change itself, should the workers fail to take  destiny in their hands. We have resolved to put an end to these gross violations of workers and trade union rights,” the NLC President said.

“As workers and citizens, we have resolved to defend our rights and put an end to the dictatorship of El-rufai and his gross violations of workers’ rights in Kaduna state.”

Recall that NLC last week issued a statement to ground all activities of the state for five days, following what it described as illegal sack of over four thousand workers in the state.