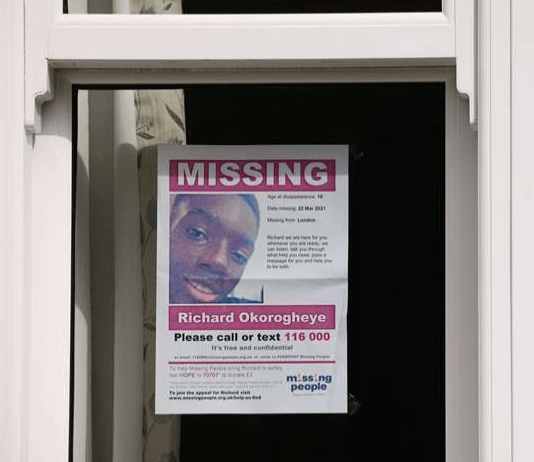 The London Metropolitan Police has confirmed that the body found in a lake in Essex was that of a 19 year-old Nigerian student, Richard Okorogheye.

The teenager went missing from his home in Ladbroke Grove on Monday, 22 March.

Richard’s mum Evidence Joel, a nurse, reported him missing on Wednesday, 24 March to Met Police. Richard was the only child of her mother.

She was stunned by the initial indifference shown by the police.

One officer was quoted to have said “if you can’t find your son, how do you want the police to do so”.

On 5 April, at approximately 14:01hrs, the Met said they were informed by colleagues from Essex Police that the body of a man had been found in a lake in Epping Forest.

“Formal identification has now taken place and the body has been confirmed as that of 19-year-old Richard Okorogheye”, Met Police said on their website.

His next of kin have been informed and are being supported by specialist officers.

“Richard’s death is being treated as unexplained and police do not believe, at this stage, that there was any third-party involvement”, the Met Police said on their website.

“The cause of death is pending whilst further investigations are carried out, however it found no evidence of physical trauma or assault.

“My deepest sympathies go out to Richard’s family at this incredibly difficult time. This was not the outcome that any of us had hoped for and we will ensure that his grieving family are well-supported by specially trained officers”.

The investigation into the circumstances of Richard’s death is ongoing.