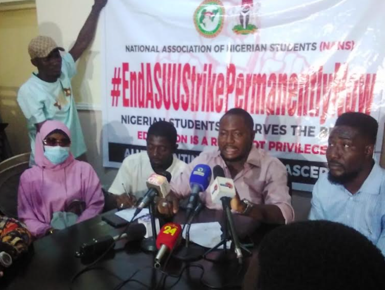 The National Association of Nigerian Students (NANS), has advised the Federal Government of Nigeria to accept the sad realities of the public universities and work towards ending the lingering ASUU strike.

NANS alleged that there is not enough commitment being demonstrated by the parties concerned to bring an immediate end to the strike that has disrupted the university’s academic calendar.

Addressing a press briefing at the Secretariat of the Nigeria Union of Journalists (NUJ), Kaduna Council on Wednesday, the Chairman, taskforce on end ASUU strike, Comrade Dominic Philip, explained that NANS cannot sit back and watch the students’ future and future of the nation being wasted.

Philip, however, said that the egotistical and unyielding disposition of those responsible for settling the matter in question amicably is contributing to the lingering ASUU strike.

He described the strike action as unbearable and sad development having lost a whole academic session at home due to nonchalant attitude of the Federal government to reach an amicable conclusion with ASUU to end its strike.

Speaking on why the earlier plan to block Abuja-Kaduna highway was called off, Philip explained that security concerns were raised at a meeting with heads of DSS, the Police and Civil Defense who cited the volatile and peculiar nature of Kaduna state where hoodlums could easily hijack peaceful protests to maim members of the public and loot property.

He said; “our earlier decision was sheathed in the interest of the state, country and our people who may be victims of unforeseen circumstances that may arise in the event our good intention was abused by unscrupulous elements who do not mean well for our dear nation.

“However, due to several calls from well-meaning Nigerians and calls by the security agencies for considerations of the peculiarity of Kaduna with regard to the volatility of the security of the city, we have chosen to demonstrate the kind of gesture that we expect the negotiating parties especially the Federal Government to exhibit in their meetings so that there could be a headway towards ending the strike.

“We have made compromises to our earlier plans of commencing mass action today, by deferring the protest to also consolidate on the new schedule released by the National Executive Council of NANS.”