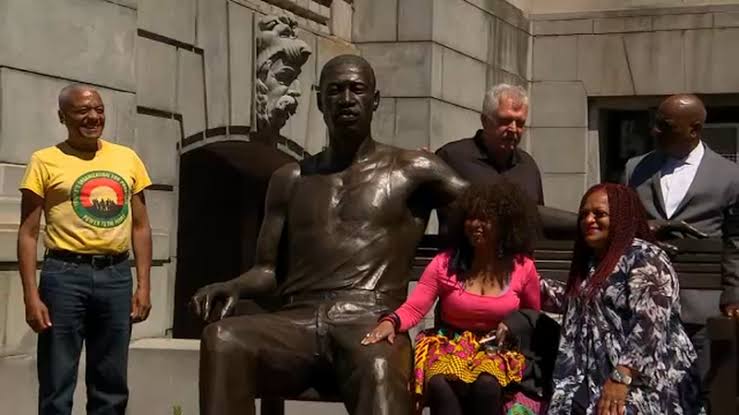 A statue of George Floyd erected in Brooklyn has been vandalised just less than a week after its unveiling.

The 700-pounds bronze statue of George Floyd was unveiled in Brooklyn, a predominantly African American city in Newark on June 19, in commemoration of the Juneteenth celebration.

The statue, which depicts Floyd sitting on a bench, was commissioned by actor and filmmaker Leon Pinkeye and sculpted by artist Stanley Watts as a donation to the city.

The statue was, however, defaced on Thursday with white and black spray paint.

According to multiple reports by local media, black paint was thrown on the bust of Floyd. The group, considered to be a white right-wing hate group, also painted “PatriotsFront.Us” at the pedestal with white paint.

The New York Police said they are investigating the vandalism. “The HCTF is investigating vandalism, discovered this morning, to the new George Floyd statue that was unveiled at 1545 Flatbush Ave. in Brooklyn @NYPD70Pct this past weekend. If you have any information, you are urged to DM @NYPDTips or call them @ 1-800-577-TIPS,” NYPD tweeted.

A Democrat and New York City Council Member Farah Louis immediately condemned and called it a “shameful act” and “hate crime” in a statement on Thursday. Louis also asserted that the action will not deter “the efforts to achieve racial justice and equality.” Louis also said that her office is working with the artist, Chris Carnabuci, to repair the damage.

This came after police in Newark said that they are investigating the defacing of another Floyd bust at City Hall in New Jersey. This was vandalised overnight. The 700-pound bronze statue also had the name of the same hate group painted in white on the front..

The surveillance footage showed four unidentified individuals who approached the statue at around 3.40am, before they walked away a short time later.