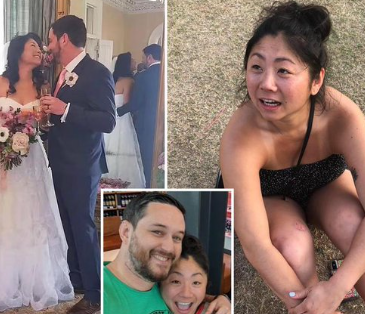 A man has been accused of killing his wife during their honeymoon trip in Fiji, ABC News reported Friday.

“The Fiji Police Force confirmed that on the afternoon of July 9, a woman identified as 36-year-old U.S. citizen Christe Chen was found motionless on the floor of her room by staff at Turtle Island, a 500-acre private island resort located in Fiji’s Yasawa archipelago. The resort’s management alerted authorities, who responded and pronounced Chen dead at the scene. She had been beaten to death, police told ABC News.”

The woman’s husband, 38-year-old Bradley Robert Dawson, was found and taken into custody a few days later in the town on Nadi, law enforcement explained.

The woman reportedly suffered several traumatic injuries and blunt force trauma to her head, according to post-mortem documents the outlet reviewed.

A photo showed the couple on their wedding day:

Dawson was charged with one count of murder, and his case referred to the Lautoka High Court. Meanwhile, he was still in custody inside the Fiji Corrections Services’ building, the ABC report said.

“Dawson’s attorney, Iqbal Khan, told ABC News he intends to file a bail application on behalf of his client on July 25 but that he believes it will be difficult to secure bail, because Dawson is a foreigner with no local family or connections that can provide assurances,” the outlet continued.

The couple from Memphis, Tennessee, married in February but delayed their honeymoon until recently, according to the Mail article.

A local said the pair apparently fought the day the tragedy occurred, stating, “There was a heated argument.”