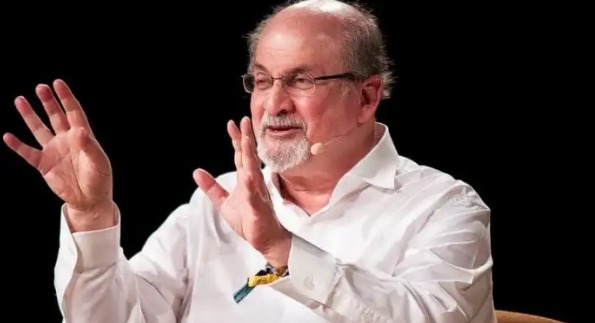 Author Sir Salman Rushdie, whose writing led to death threats, has been attacked on stage at an event in New York state.

The Indian-born British author was about to give a lecture when a man stormed the stage at the Chautauqua Institution and began punching or stabbing Sir Salman as he was being introduced, according to an AP reporter who was there.

The 75-year-old was taken or fell to the floor, and the man was restrained.

A video posted online showed a number of people rushing on stage in the aftermath as Sir Salman was tended to.

A picture circulating on social media appeared to show Sir Salman with his legs slightly raised and someone applying pressure to his abdomen.

On stage there were two yellow chairs, a table and rug.

Dozens of audience members were present.

His book, The Satanic Verses, has been banned in Iran since 1988, as many Muslims consider it to be blasphemous.

A year after that, Iran’s late leader Ayatollah Ruhollah Khomeini issued a fatwa, or edict, calling for Sir Salman’s death.

The Middle East country also offered a bounty of more than $3m for anyone who kills Rushdie.

● RUSHDIE CONTINUED TO WRITE DESPITE THREAT TO LIFE

Salman Rushdie is an Indian-born British author whose writing about religion and politics has made him controversial in some parts of the world.

Some of the scenes in the 1988 book depict a character modelled on the Prophet Muhammad and this was met with anger from some members of the Muslim community in the UK.

Protests spread to Pakistan in January 1989 and the following months, the spiritual leader of revolutionary Iran, Ayatollah Ruhollah Khomeini, condemned the book and issues a fatwa against him.

A bounty was offered for his death. Rushdie went into hiding under the protection of Scotland Yard in the UK, although he appeared in public occasionally.

Despite the threat to his life, he continued to write and in 1998 the Iranian government said it would no longer enforce the fatwa.

Rushdie wrote about his experience in the third-person memoir Joseph Anton in 2012. He was knighted in 2007, a move that was criticised by the Iranian and Pakistani governments.