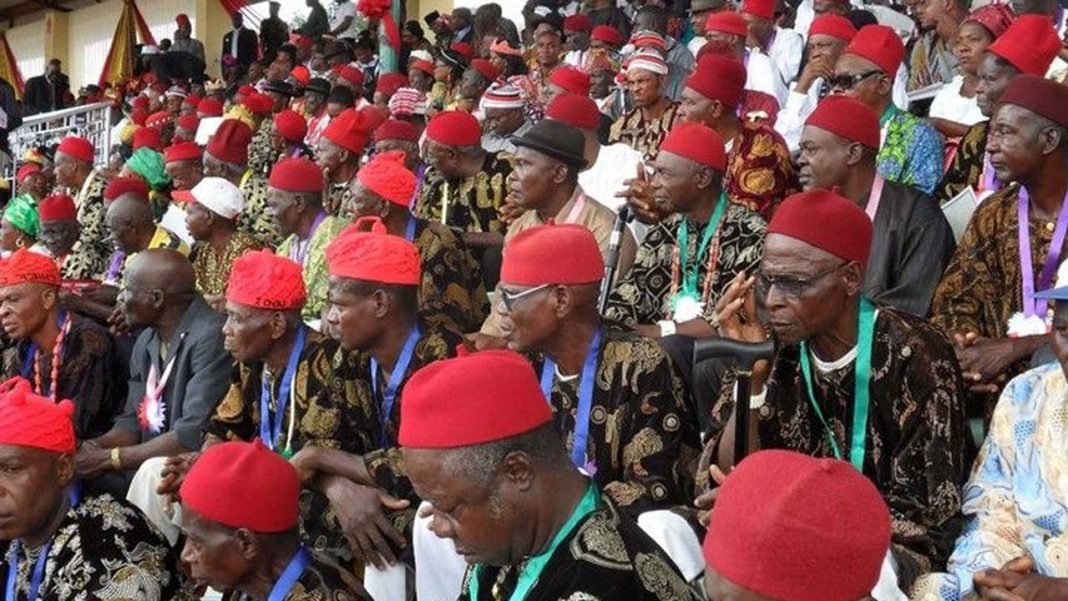 Disturbed by the negative implications of the seven-day sit-at-home directive of the Indigenous People of Biafra, IPOB, for the Anambra governorship election, the state, the South-East zone, and Nigeria, Ohanaeze Ndigbo has begged the separatist group to reconsider the stand.

Last week, the IPOB vowed to observe a seven-day lock down in the South-East as from November 5 in support of its detained Leader, Mazi Nnamdi Kanu, unless he is released by the Federal Government on or before November 4.

Noting that Anambra is the economic live wire of the South-East, Ohanaeze Ndigbo said any harm to the state will “create untold disastrous chain reactions and catastrophe for the Igbo.”

In a statement by its National Publicity Secretary, Chief Chiedozie Alex Ogbonnia, Ohanaeze urged the Chairman, South-East Governors Forum and the Governor of Ebonyi State, Engr. Dave Umahi, to convene an emergency meeting of Igbo stakeholders and Youth Leaders for the purpose of addressing the legitimacy crisis in the zone especially as it relates to Anambra State election and the political solution for the release of Nnamdi Kanu.

The statement read: “The Ohanaeze Ndigbo Worldwide pleads with the Indigenous People of Biafra (IPOB) to reconsider the 7 days’ Sit at Home order in the South-East of Nigeria from November 5 to November 11.

“This is to enable the governorship election for Anambra State scheduled for November 6 to hold.

“It is important to note that Anambra State is the economic live wire of the South East with an impressive steady growth trajectory.

“For instance, Anambra State showcases the best rural road network and rural community development in the South East if not in the entire Nigeria.

Anambra is home to the greatest number of small, medium and large scale industries in the South East.

“Most recently, Anambra has added a cargo airport to its resource base.

“Above all, Onitsha is the largest market in West Africa. The implication of the above illustration is that Anambra State is the melting pot of Igbo traders and artisans.

“It stands to reason that Anambra is the big Iroko tree that provides a shade for most Igbos. Apart from the shade, it also hosts the numerous birds that perch on the branches.

Therefore any harm to the Iroko tree will create untold disastrous chain reactions and catastrophe for the Igbo.

“While pleading with the IPOB to rescind the Lock Down plan, Ohanaeze Ndigbo requests the Chairman, South East Governors Forum and the Governor of Ebonyi State, Engr. Dave Umahi to convene an emergency meeting of Igbo stake holders and the Youth Leaders for the purpose of addressing the legitimacy crisis in the South East, especially as it relates to Anambra State election and the political solution for the release of Mazi Nnamdi Kanu.

“It is important to point out that one of the causes of the crisis of confidence in the South-East is because of the yawning gap between the Youths and indeed the masses, on one side and the political leaders on the other.

“Therefore, the leadership of the various youth groups should not be excluded in any meeting aimed at resolving the current crises in Igbo Land. In other words, the Youths want to be fully convinced of our commitment to their plight.

“Ohanaeze Ndigbo reiterates its solidarity with any group that protests the Igbo alienation in the project Nigeria with a caution for restraint, maturity and wisdom.

“It is based on the foregoing that Ohanaeze adopts the philosophy of dialogue, negotiations in coalition with other concerned groups that comprise the Southern and Middle Belt Leadership Forum led by Chief E K Clark.

“It is also lamentable that the burial ceremony for the Afara Ukwu born Chief Mrs Victoria Aguiyi Ironsi, slated for November 5 in Umuahia, Abia State may be drastically affected by the prevailing Igbo social climate.

General JTU Aguiyi Ironsi represents so many things to the Igbo and we owe his soul a duty.

The traditional rulers, Archbishops, Bishops and the Clergy are also requested to brace up in their roles as the cultural and spiritual leaders of society.

“Ambassador Professor George Obiozor, the President General of Ohanaeze Ndigbo Worldwide is very perturbed that the serenity, tranquility and aggressive entrepreneurship for which the Igbo are known are gradually yielding to the unknown dark forces.

“In many respects, Anambra is the engine that propels the Igbo enterprise. As elders we should not fold our arms while the goat dies in the tether.

“Ohanaeze Ndigbo is of the conviction that the disruption of the Anambra State election and the adverse consequences are a major setback to the Igbo civilization.”