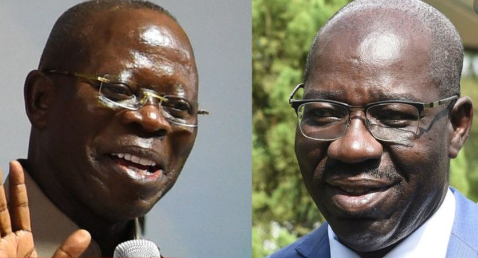 The ruling All Progressives Congress APC has named two of its former National Chairmen, Chief John Odigie-Oyegun and Comrade Adams Oshiomhole into the National Campaign Council for Pastor Osagie Ize-Iyamu in the Edo State Governorship Election.

Both men had been at loggerheads in the lead-up to the APC primary election in Edo state, with Odigie-Oyegun rooting for the incumbent, Godwin Obaseki who had since defected to the Peoples Democratic Party PDP.

Oshiomhole on his part allegedly worked for the emergence of Pastor Osagie Ize-Iyamu who is now the party’s candidate.

The development led Chief Odigie-Oyegun to call for the dissolution of the Oshiomhole-led National Working Committee NWC.

The Caretaker/Extra-Ordinary National Convention Planning Committee of the APC disclosed this in a statement issued Thursday in Abuja and signed by the Deputy National Publicity Secretary, Mr Yekini Nabena.