No Better Party Than PDP In Nigeria, Atiku Speaks At Bauchi Rally (VIDEO) 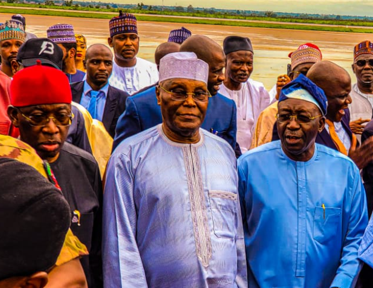 The Presidential Candidate of the Peoples Democratic Party (PDP), Atiku Abubakar, says there is no better party than the PDP in Nigeria.

Atiku made this known on Wednesday when he addressed PDP supporters at a rally in Bauchi, North-East Nigeria.

“There is no better party than PDP in this country. We are the oldest, we are the strongest, and we are the largest.

“Therefore, I want to use this opportunity to congratulate the people of Bauchi and the governor of Bauchi, Bala Mohammed, for the achievement and I believe when we start the real presidential campaign, we will witness a larger turnout,” he said.

Aside from Mohammed, those present at the rally include PDP National Chairman, Iyorchia Ayu; PDP Chairman in Bauchi, Hamza Akuyam; as well as other chieftains like ex-lawmaker, Dino Melaye.

Atiku also received some defectors to the PDP in the state, which he described as his home.

Atiku, 75, from Adamawa State also in the North-East, is running for Aso Rock’s top job alongside other top contenders like Bola Tinubu of the All Progressives Congress and Peter Obi of the Labour Party in an election that has been described by analysts as a three-horse race.