Trump Threatens to Leave WHO

In a four-page letter detailing his grievances with the WHO, Trump called on the group to “demonstrate independence from China,” renewing a complaint that led him in April to temporarily suspend U.S. funding. He posted the letter on Twitter late Monday. 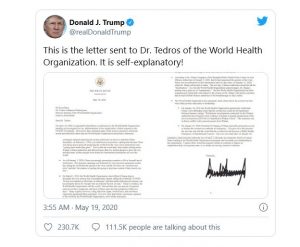 Trump repeated calls for “an impartial, independent and comprehensive review” of how the WHO handled the crisis.

The World Health Assembly, the Geneva-based group’s governing body, passed a resolution Tuesday calling for an independent assessment of the global response to the pandemic, which the WHO has said it welcomes and will initiate at an unspecified time.

“The WHO is fully committed to transparency, accountability and continuous improvement,” Tedros said in closing remarks to the assembly, without commenting directly on Trump’s letter. “We want accountability more than anyone.”