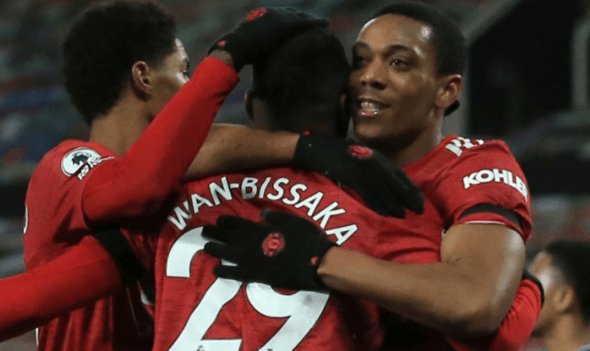 Manchester United safely progressed to the Europa League last 16 as their goalless draw with Real Sociedad at Old Trafford saw them through 4-0 on aggregate.

Real Sociedad were given an early chance to get a goal back in the tie, but Mikel Oyarzabal struck a penalty high and wide after Dan James had brought him down in the box.

Bruno Fernandes hit the bar with a superb effort later in the first half, while substitute Axel Tuanzebe had a second-half header ruled out by VAR for a Victor Lindelof foul.

The game will likely be remembered for second-half substitute Shola Shoretire becoming the youngest-ever Manchester United player in a European game at 17 years and 23 days, while summer signing Amad Diallo made his home debut from the bench.

With several intriguing mouth-watering opponents awaiting the last 16 – including Ole Gunnar Solskjaer’s former club Molde, or one of three other British sides in Tottenham, Rangers and Arsenal – all eyes turn to the draw at midday on Friday.

Leicester suffered a shock Europa League exit after suffering a 2-0 defeat at the hands of Slavia Prague at the King Power Stadium.

After last week’s 0-0 draw in Prague, Brendan Rodgers’ side still had plenty of work to do but, in the absence of the rested Harvey Barnes and the injured James Maddison, they struggled to find their rhythm on Thursday.

Their task was made even harder as Lukas Provod’s 49th-minute away goal left them with a mountain to climb.

Rodgers sent on Barnes in the 61st minute but the damage had already been done and Abdallah Sima’s strike (79) rounded off a memorable European night for the Czech side to send them into Friday’s last-16 draw.

After a disappointing night, Leicester’s focus will now switch back to the Premier League where they will look to build on what has already been a promising season and secure a top-four spot and Champions League football.