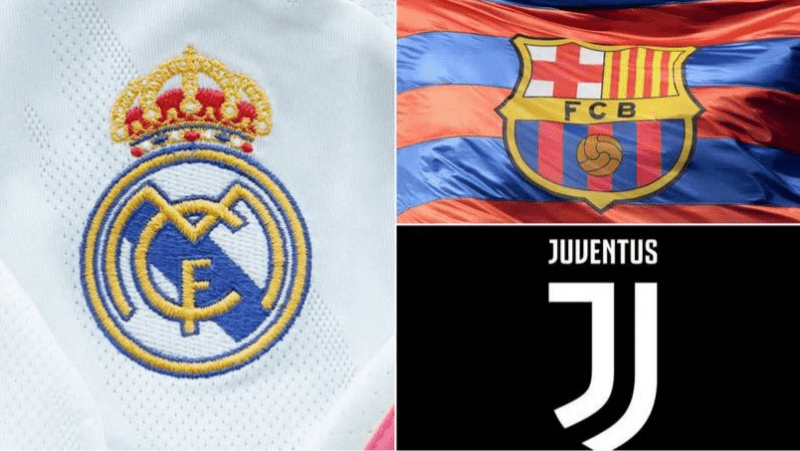 Real Madrid, Barcelona and Juventus are set to be expelled from the Champions League due to their involvement in the European Super League

Last month’s attempt by 12 of Europe’s biggest clubs to breakaway from the Champions League to form their own Super League fell apart quickly.

Once the Premier League’s ‘big six’ backed out, after huge pressure from the fans, it wasn’t long until sides from La Liga and Serie A also decided that it wasn’t a good idea.

However Real, Barca and Juve have stuck to their guns, in part because of Florentino Perez and Andrea Agnelli being so integral to the league’s inclusion, and have so far refused to officially end their involvement.

That stubbornness is set to lead to a big punishment. According to Cadena COPE in Spain, the trio are set to be thrown out of the Champions League and given a big fine by the European governing body.

The report claims that Spain and Italy wouldn’t lose their places in Europe’s top club competition next season and instead those players below the trio would take their spots.

In Spain that would mean Real Sociedad and Real Betis taking the spots of Los Blancos and Barcelona from September.

Juventus’ battle to get into the top four, which went down to the final day, would all be for nothing and, instead of the Old Lady, Napoli would get into the Champions League.

Gennaro Gattuso was sacked from Napoli after drawing the final day of the season to Verona and dropping out of the top four and has since taken the job at Fiorentina.

The report claims that the punished three could be ready to take the case to the Court For Arbitration in Sport as they’d no doubt protest any decision to kick them out.

Whilst the trio who are in the competition are set to get a huge punishment, reports have claimed the other nine teams will just be fined a percentage of the money from their next European campaigns.

A similar punishment is also expected to be handed down to Manchester City, Manchester United, Liverpool, Chelsea, Tottenham Hotspur and Arsenal by the Premier League.

On Sunday, Liverpool and Chelsea confirmed they’d follow the two Manchester clubs into next season’s Champions League whilst Spurs will play in the first year of the Europa Conference Leagues