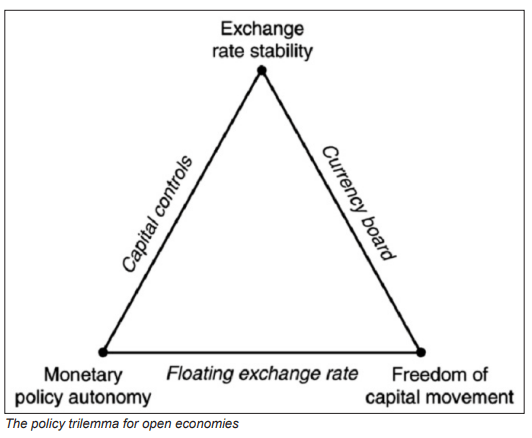 Almost every week there seems to be a new boogeyman added to the long and growing list of enemies the Central Bank of Nigeria (CBN) is fighting in its bid to maintain Naira stability against the world’s only major global reserve currency, the U.S dollar.

Some years ago it was importers of the famous 41 items banned from accessing dollars from the CBN, later it was milk importers, then some months ago, there was the showdown against bureau the change (BDC) operators and last week the CBN brought the fight to a little known website abokiFX.

Abokifx is a website that publishes exchange rates for Nigeria’s unauthorized parallel currency market. The CBN on Friday accused Abokifx of manipulating prices in the unofficial market. Abokifx denies the allegations.

Since the CBN’s recent unorthodox policies, the naira has taken a turn for the worse in the parallel market. The naira has lost 13 percent of its value since July 28 after the CBN stopped sales of the U.S dollar to BDCs.

The naira has also weakened considerably over the last year while inflation has remained in high double digits (currently 17.38%) leading to increased demand for dollar-assets and cryptocurrencies as a better store of value.

The fact that the CBN’s efforts so far have failed to stabilise FX signals that the current FX issues would require a change in policy direction.

Today, the CBN is in a lose-lose position, blocking the investment case for Nigeria and allowing the continued fall of the naira due to an absence of secondary inflows of dollars into the economy.

Portfolio flows have all but trickled to a halt while Foreign Direct Investors (FDI) are largely steering clear of the Nigerian market.

The Nigerian Capital Importation Q1/Q2 2021 report released in July by the National Bureau of Statistics (NBS) showed that the value of capital importation into the country fell quarter-on-quarter to $875.62 million in the second quarter of 2021.

This represents a 54 per cent decline when compared to $1.91 billion recorded in Q1’21.

This paper believes that the CBN ought to go back to the basics of targeting inflation and bringing it below double digits while simultaneously pushing for a stable naira through a market approach for trading the currency which will give investors the confidence to hold naira assets.

In essence having interest rates that are positive in real terms should help attract flows which would then help to drive down inflation.

With a market driven stable foreign exchange rate and tame inflation, the CBN will begin to see the benefits through an influx of dollars as foreign investors would not need to hedge against FX risk, inflation risk as well as regulatory uncertainty.

The CBN has clearly lost the plot with the recent mistake (see our lead story) of going after BDCs in a period of heightened retail demand for dollars.

There is also the point to be made that the current management of the CBN has overseen one of the biggest increases in BDC licensing in the history of the country.

What was the point of registering all these BDCs if the CBN could not effectively police their actions? Would it not have been better to reward the BDCs which are abiding by the rules and sanctioning those that were engaging in economic sabotage and currency round tripping?

The CBN is trying to square the circle of the impossible trinity also called the Mundell-Fleming trilemma, an economic theory, which posits that countries may choose from three options when making fundamental decisions about their international monetary policy agreements.

This theory exposes the instability inherent in using the three primary options available to a country when establishing and monitoring its international monetary policy agreements.