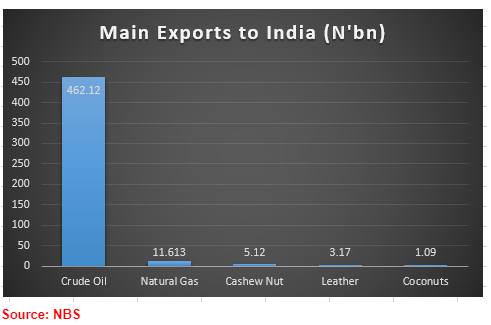 India, Spain and China were the top trading partners to Nigeria in the first quarter of 2021, according to the latest foreign trade report from the National Bureau of Statistics (NBS).

The total export to India in the period was valued at N488.1 billion or 16.8 percent of total export. The largest export commodity to India was Petroleum oils and oils obtained from bituminous minerals, crude valued at (N462.12 billion).

Imports from India were valued at N589.11billion, accounting for 8.6 percent of total imports. Import trade during the period was dominated by imported motorcycles and cycles (N86.67 billion), followed by Parts of Machinery for working Rubber (N67.81 billion), Other Antibiotics (N45.32billion) and others.

The value of total exports to Spain stood at N287.2billion or 9.9 percent of total export. The dominant export product was Petroleum oils and oils obtained from bituminous minerals, crude valued at N213.1 billion.

This was followed by Natural liquefied gas worth N62.3 billion and Leather further prepared after tanning valued at N8.6 billion.

Others are good fermented Cocoa beans and Technical specified Natural Rubber valued at N1.2billion and N0.5 billion respectively. On the other hand, the value of imports from Spain during the quarter stood at N78.9billion.

Nigeria’s export to China was valued at N190.1billion or 6.5 percent of total export in the period. This was largely dominated by exports of Petroleum oils and oils obtained from bituminous minerals, crude (N57.61billion), Natural Gas liquefied (N47.50billion) and Sesamum seeds (N23.11billion).

On the other hand, the value of imports from China stood at N200.94 billion representing 29.34% of total imports. The largest import commodity from China was Machines 4 the reception, conversion & transmission (N75.12 billion), T-shirts, Singlet and other Vests of Cotton (N62.60 billion), Other Herbicides (N60.35billion) and others.