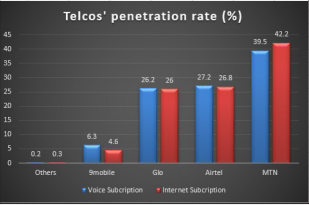 MTN Nigeria continues to be a silver lining in a recovering economy, and its contribution to national output cannot be overemphasized.

The company offers telecommunication and mobile payment, and it is in the forefront for both active and internet subscription in the fourth quarter of 2020.

There are positive prognosis for MTN and the future is bright because the outlook for data consumption and mobile payment is strong in all of the countries of operation that it operates.

Interestingly young people across the globe are increasingly becoming addicted to data usage, and the proliferation of the smartphone is a catalyst for sporadic consumption of data that will spur MTN to growth.

Notably, internet subscription was bolstered by the accelerated usage of zoom, Microsoft team, goggle meet and video conferencing as the lockdown imposed by the government to curb the spread of the virus confined people to their homes.

The total number of active voice subscriptions declined by 0.32 percent Quarter on quarter (q/q) but rose by 10.78 percent year on year (y/y) to 204.6 million, according to the statistics body.

The statistics body added that the total internet subscriber base grew by 1.84 percent (q/q) and 22.38 percent (y/y) to 154.3 million. Using an estimated population of c.206 million, the mobile penetration and internet adoption rate stands at 99 percent and 75 percent, respectively.

Interestingly, the continued investments in improving internet infrastructure to accelerate 4G coverage across the country will help MTN magnify its market share across the continent.

“Also contributing, is the heightened competition among industry players for market share which has also forced prices of data bundles lower, making internet usage very attractive to the average user, and perhaps this would eventually make data cheaper like it is in other markets,” according to analysts at CSL Stock Brokers Limited.